The Disowning Of Rupert Myers

Junior barrister and contributor to GQ Magazine, the Telegraph, and Conservative Home Rupert Myers has vanished from Twitter. He has been sacked by GQ, and disowned by many across the political spectrum. This is not unconnected to his being accused of not being able to behave himself in a grown-up manner when alone with a member of the opposite sex. And that should have been that. 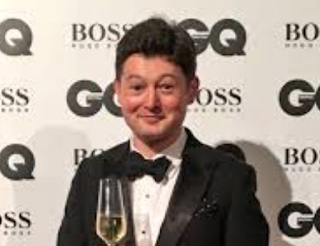 Won't be doing any of that for a while

But for many out there on the right, a problem entered: they could not possibly stand by and say nothing, because surely some Rotten Lefty (tm) would tar them all with the same brush. This, of course, assumes anyone left of them adheres to their low standards in such matters. So Myers had to be disowned, and preferably reinvented as a leftist. 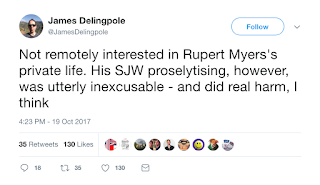 The convocation of the irredeemably batshit otherwise known as Breitbart knew exactly what they had to do: “Anti-Brexit, Pro-Social Justice GQ Writer Rupert Myers Sacked After Sexual Assault Allegations” they proclaimed, making sure to tell that he had contributed to the Guardian and Independent, and stressing “The liberal journalist has written at length against U.S. President Donald Trump, Brexit, and a host of other folk devils of the Left”. 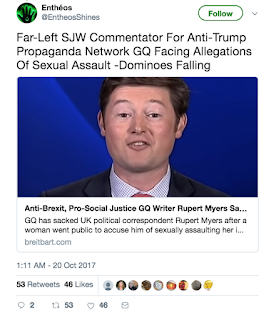 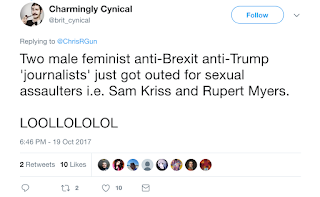 The idiocy went on. “Two male feminist anti-Brexit anti-Trump 'journalists' just got outed for sexual assaulters i.e. Sam Kriss and Rupert Myers … LOOLLOLOLOL” was one example, and “Patronising liberal journalist who made jibes about Catholic priests wearing dresses, turns out to be a slimy toad” from Caroline Farrow, of alternate reality notoriety, another. 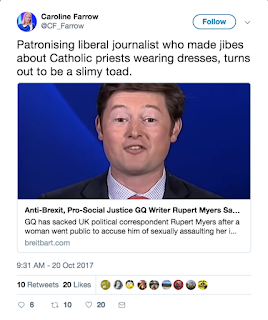 But here a problem entered: actual reality. Someone admitted into the hallowed halls of Conservative Home is hardly going to be a raving leftist. Another Angry Voice duly brought the batshit tendency down to earth with “Amazing: Rupert Myers (Daily Mail, Spectator, Telegraph, Conservative Home) is outed as a creepy sex pest, & now he's suddenly a ‘leftie’!” Also, he was not just a conservative, he was a Tory Party member. 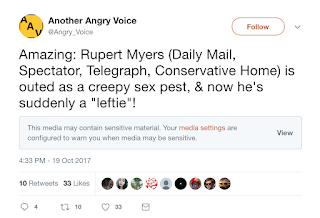 As one Tweeter pointed out, “So now he's a confirmed sex creep, Rupert Myers, deputy chairman of the Bermondsey and Old Southwark Conservative Association is a ‘leftie’”. Yes, Myers, far from being a “liberal”, an “SJW”, “Far-left”, or “feminist”, was a Tory activist in a position of no little influence within the party. That this was not brought up beforehand has more to do with some on Planet Earth knowing misbehaviour is not party political. 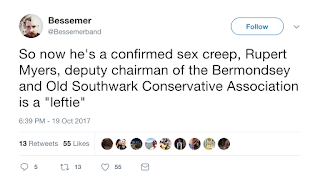 What is most revealing here is how those out there on the right - unprompted - see these revelations not as what they are, but an opportunity to indulge in a little smearing on the back of them. Somebody must have an awfully empty diary.
Posted by Tim Fenton at 16:13

Actually, most of the attention I've seen given to Rupert on twitter has been less about his political leanings, and more about the utter hypocrisy of the guy writing articles like this* and portraying himself as a male feminist ally.

From the perspective of the right, Myers was a Lefty: a Cameroonian liberal, sucker up to the Metropolitan Leftocracy. And just as Chukka is more despised by the Corbynites than a Tory, those perceived as traitors to true conservatism are genuinely despised by those nominally on the same side. It's genuine Schadenfreude not confected