The last words of the interview will come back to haunt both interviewer and interviewee: “I was just honest. I’ve been honest from the start and I’ve not got anything to hide at all”. Thus the words of Sophie Evans, who is now in the news thanks to the advocacy of the perpetually thirsty Paul Staines and his rabble at the Guido Fawkes blog, and her occasional proximity to Sheffield Hallam’s Labour MP Jared O’Mara. 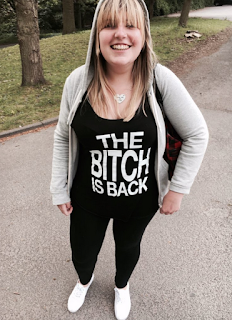 Sophie Evans - and, er, That Word

Ms Evans was talking to Jo Coburn on the BBC’s Daily Politics. She claimed O’Mara had spoken to her in such a way that, should it be true, would be inexcusable. But what she had not, it seems, told Ms Coburn - and nor had The Great Guido - was that there had been significant previous between her and O’Mara. 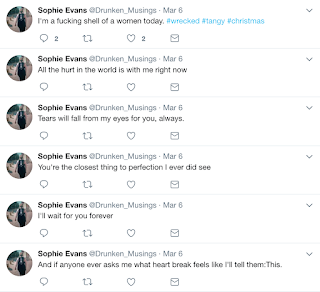 Now, once again it has to be stressed that if O’Mara has been caught bang to rights making unacceptable comments, they will not be defended here. That is not the point of this post, which is about what questions the BBC asked before they effectively took the Fawkes rabble on trust, after they had published an open letter from Ms Evans to O’Mara where she said “I had no idea who you were” about an incident in March this year.

Because, by her own admission, she knew exactly who he was. Moreover, she tells of the incident where the abuse took place “It was on the night of Sunday 5th March (or rather the early hours of the 6th March) in West Street Live”, but her Twitter feed for the 6th of March is devoid of the subject. If there had been a bust-up which involved her and her pals being ejected from the place (it’s O’Mara’s pub), one might think there would have been.

She later told (presumably about the incident) “I said (loudly) ‘The dj's got a problem with me cuz I turned him down’ (Jared not present at that point)  … Jared then came out so i went to speak to him on a level as I had met him previously” [my emphasis].

Yet she was not, at the time, ill-disposed towards O’Mara, also letting it be known that “all I wanted was to share what happened. I wish Jared all the best in Parliament”.

Did Daily Politics get all of that beforehand, and if not, why not? It took no more than a few minutes’ searching to pull all of that out of her Twitter feed. Moreover, the BBC ought to know by now that the Fawkes rabble run a borderline Fake News operation and have decided they are going to “get” O’Mara, continuing their assault this afternoon by excavating comments he made fifteen years ago. 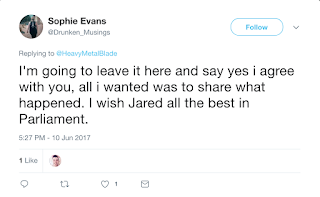 The ironic thing is that, should this saga end up with a by-election, Labour will most likely win it hands down and the whole exercise will have been for nothing - except to allow the Fawkes rabble to spend a little more time wearing their collective schoolboy sniggers.

But in the meantime, perhaps the BBC might stop and think about where they’re getting their stories. You should never, but never, but NEVER take the Fawkes crowd on trust. That is all.
Posted by Tim Fenton at 16:34

If you're looking at her timeline then you'll note that there is reference from others to Jared's sexism way back before he was elected.

Anybody who thinks Coburn has anything to offer is an arsehead.

But then so is Coburn, like the rest of BBC political propaganda and its monkey front men and women. Trust them and you deserve all the lying bullshit you get.