The age of instantly available information retrieval has not been kind to our free and fearless press: gone are the days when they could perform screeching U-Turns, slip piffling “corrections” in to Page 94, or recycle old stories for profit without being called out by someone with access to the Web. And it is the recycling of old stories that has tripped up the Murdoch goons at the Super Soaraway Currant Bun today. 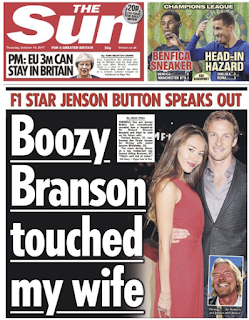 Worse for the inmates of the Baby Shard bunker, their latest attempt to pass off old news as happening now is all over today’s Sun front page. “F1 Star Jenson Button Speaks Out … Boozy Branson Touched My Wife” screams the headline. And, apart from Button no longer being involved in F1, and the young woman in question not being his wife at the time, the story appears reasonably soundly based.

But then the name on the by-line comes into view, and suspicions instantly arise. Leering Nick Pisa, the hack notorious for writing the “wrong” Meredith Kercher story, and telling readers of the Mail that Amanda Knox Was The One Wot Did It, is not exactly a fount of ground-breaking investigative journalism. And the rest of the Sun story shows that all he appears to have done is lift the story from Button’s new autobiography.

“Shock claims made in F1 ace's new autobiography say Virgin boss Sir Richard stroked his girlfriend's face while he was away from the table … The clash during dinner at a top restaurant saw Jenson telling Branson, 67: ‘That’s well out of order … Branson was warned to back off after touching and trying to chat up F1 star’s future wife … Jenson, 37, squared up to the sozzled Virgin tycoon at an exclusive Japanese restaurant”.

Yeah, right. But when did this happen? “The incident took place in 2009 during the Australian Grand Prix … Details have emerged in Jenson’s new book Life to the Limit”. Wrong, Nick Pisa and Murdoch goons. The details emerged EIGHT YEARS AGO. 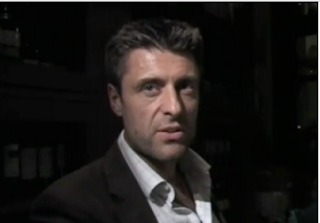 Make that more than eight years ago: Mail Online told its readers in July 2009 that “Jenson Button lifts the lid on showdown with Richard Branson after Virgin boss made play for his girl”. There was more. “Button said he had to give a stern warning to Sir Richard after he apparently made a play for pretty Jessica Michibata, 24, at a party to celebrate Branson's sponsorship of Button's racing team … Button, 29, says Branson realised he had overstepped the mark and was apologetic after the event”.

Can it get worse? You bet it could: the incident in question was first publicised in a GQ magazine interview with Jenson Button, and the interviewer was none other than Rebekah Brooks’ pal from long back in tabloid dark arts days … Piers Morgan. So today the woman who has ultimate charge over the Sun will be getting stick from the Good Morning Britain co-host over taking eight years to catch up with his GQ interview.

So that’s red faces all round at the Murdoch press. And another nail in the coffin of Nick Pisa’s remaining journalistic credibility. Now you know, once more … Don’t Buy The Sun.
Posted by Tim Fenton at 09:53

I believe that the Bearded One made a mention of the altercation in his own autobiography.

I see the Sun is unable to distinguish between sexual assault on a woman, and the affect on her, and a clumsy pass and the affront to another male's dignity.

I wonder if he also spilt Jensen's pint?