So Farewell Then Dan Hodges

At long last, the semi-detached has detached himself: in a fit of pique brought on by nobody caring sufficiently to chuck him out, or whatever alternative excuse he has found fit to present to readers at the bear pit that is Telegraph blogs, Dan Hodges, the Colonel Nicholson of the Labour Party, has left the PoW camp and wandered off into the jungle, to the relief of many who wished he had done it earlier. 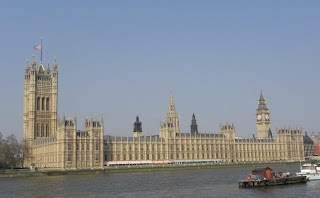 But he has made sure that anyone who was paying attention to him, rather than last night’s momentous events, knew that he was the one doing the deed out of principle, but not necessarily the same principle that saw him embracing Lynton Crosby on the occasion of Alexander Boris de Pfeffel Johnson being foisted upon the unfortunate inhabitants of London for a second term.

So why did he do it? “Miliband was governed by narrow political interests – not those of Syrian children”. Yes, when in doubt, WHY WON’T WE THINK ABOUT THE CHILDREN? As with LouiseMensch, the impression is given that lobbing a few cruise missiles at Syria from a ship standing off the coast is any more than a futile gesture to try and keep the politicians’ spirits up.

And, talking of politicians, what about those elsewhere in the Middle East? “Israel will have watched the spectacle of British politicians stating events in the middle-east are not their concern”. Israel stopped depending on us after Ike told all the participants in the Suez campaign to desist, on pain of his not securing re-election. Had it been the USA not being bothered, Israel would be concerned. As it’s us, they aren’t.

“Britain is now an isolationist nation” bleats Hodges, but this is crap. We don’t want to make things worse than they already are. Then he continues bleating about what Mil The Younger is alleged to have done, as if he was a ringside spectator, which by this time in his Labour career he definitely was not. Miliband is accused of changing his mind, and giving Young Dave all manner of undertakings.

To be able to know all of this when you’re not party to the discussions is truly remarkable. But Hodges’ conclusions are not: it’s all about Miliband acting in his “narrow political interests”. So he is upset mainly because the leader of the political party he joined so many years ago turns out to be ... a politician. Just like his beloved Tone. Just like Pa Broon. And this is a resigning matter?

And so, like Perkins in Beyond The Fringe, Dan Hodges has volunteered himself to make another futile gesture, turn himself into a pointless sacrifice to a cause dear only to Himself Personally Now. Perhaps a few of those who drift around the comments sewer at Tel blogs will applaud his principled stand. Most will not care less, shrug their shoulders, and move on. As Hodges should have done long ago.

Isn't Dan Hodges normally in favour of the Labour leadership pursuing narrow political interests? Isn't winning the next election supposed to be the number one priority for a Labour leader according to Dan?

Turns out that the 'briefing' by number 10 before and just after the vote in which they implied that EM had changed his mind was a total fiction, anyway, and leaked to pre-empt criticism.

EM never agreed to support action, always made his reservations public, and became increasingly frustrated with the way his intentions were being misinterpreted.