One observer of events at Heathrow Airport last Sunday, when Glenn Greenwald’s partner David Miranda was detained for almost the full nine hours permitted under the 2000 Terrorism Act, could hardly contain himself, such was his enthusiasm for the brave and noble deeds of our security services. What the sleazy hack did not tell his Twitter followers is that he is closer to them than they might imagine. 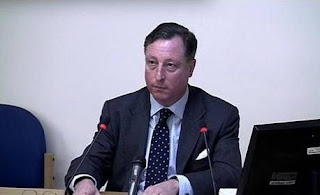 That hack was Neville “Stylish Masturbator” Thurlbeck, former chief reporter at the now-defunct Screws, and who is one of those formerly faithful Murdoch retainers facing an imminent court date. Thurlbeck’s ability to bend the available facts to meet the requirements of the headline writers, while remaining on the right side of the defamation line, is legendary. 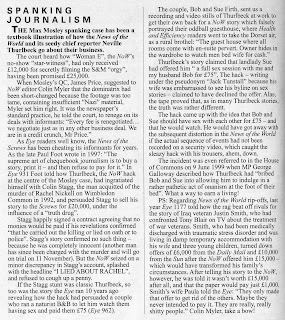 This was recounted in some detail in issue 1215 of Private Eye (see above), which recalled not only Thurlbeck’s full participation in the Screws’ shameful practice of promising payments for stories and then reneging on the deal, but also his legendary failed attempt to paint a naturist guest house in Dorset as some kind of rural brothel, where he had been offered a sex session with the owners for £75. 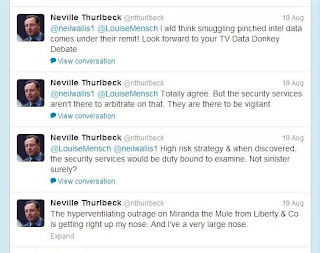 Sadly, Thurlbeck was caught not only lying, but literally with his pants down: as the owners had sex with each other – hardly a big deal as they were a married couple – Thurlbeck stood at the foot of the bed and masturbated himself. Sadly, we have not been told whether this was up to his usual level of stylishness. And this is not the only notable feature of Thurlbeck’s behaviour. 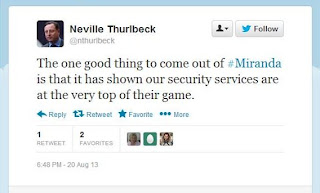 When he Tweets – not once, but twice – that “The one good thing to come out of #Miranda is that it has shown our security services are at the very top of their game”, this is not just distant admiration for the rozzers, but encouragement for his mates. Because Thurlbeck has also been revealed to be a Police informer, a relationship in which, it is conceded, information passed both ways. 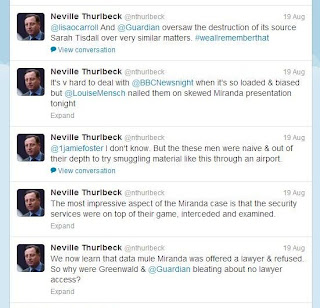 You read that right: as the excellent Brown Moses blog has noted in its Hackgate Files series, in his position as Screws chief reporter, Thurlbeck would pass information to the Met in exchange for the kind of stuff the paper needed to stand up its stories. Some of this information came from the Police National Computer. Whether any of the information should not have been passed to him is not known.

So the bloke cheerleading for the security services turns out to be a purveyor of dodgy journalism, a participant in promising rewards and then cheating the recipients out of them, a seedy wanker, and a copper’s nark. Now, perhaps the Met isn’t so bothered about who cheers it on, but anyone in the PR game viewing that collection of attributes might think they could do without his support.

Let’s hope the clerk to the court tells him to keep both hands in view at all times.
Posted by Tim Fenton at 10:43