Yesterday, I noted that not everything about the current row between Spain and Gibraltar was being reported by the British press. This has continued today, with the Telegraph’s Madrid correspondent Fiona Govan looking through the El Pais website and selecting the most convenient facts from it for her copy. The problem with this approach is that everyone else can check the same site. 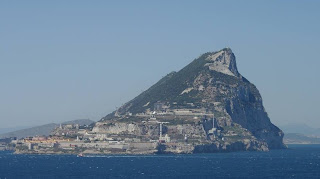 So her headline “Spain and Argentina consider anti-British deal” should be taken with a very large pinch of salt. That the Spanish Foreign Minister is visiting Buenos Aires is not in doubt, but before any discussion on mutual cooperation, he and his Argentine opposite number have to discuss the Repsol/YPF share dispute. And the Telegraph missed saying why Spain might want to do a deal with Argentina.

This is because the latter has a seat on the UN Security Council during 2013/4, thus making some kind of agreement rather more beneficial. Any support over the Falkland Islands would be a necessary quid pro quo, but would more than likely extend no further than supporting more talks. To reiterate, we’re not talking about some kind of fantasy shooting war here.

And, apparently, the Tel does not want to tell its readers why the dispute has arisen, although it is well documented by El Pais. So I will. The dropping of concrete blocks into the Bay of Algeciras by the Gibraltar authorities came as a surprise to the Spanish fishermen who depend on that area of calm and relatively warm water for their catches and their livelihoods. And they weren’t the only ones.

The Spanish authorities – both Madrid and the Junta de Andalucia – were also caught on the hop. And, worst of all for those on The Rock, nobody appears to have told the Government of the UK beforehand. So Young Dave and his jolly good chaps can be excused their current unrehearsed and uncertain behaviour. They have been kept in the dark as much as the Spanish.

So how many are affected? El Pais reports (although this detail, to no surprise, has not been relayed by the Telegraph) that as many as 400 jobs, and 53 boats, depend on the fishing ground for their catch of shellfish, along with mullet and sea bream. We are not talking significantly sized vessels here: a nine metre long boat powered by a single 130 horsepower diesel engine is typical.

What seems to have happened is that one of many arguments about which territory has control over which part of the Bay of Algeciras has got out of hand. Good diplomacy is now needed to work the genie back into the bottle. This will not be helped by the poor journalism being exhibited by far too many papers, which would rather put their Europhobia before giving readers the complete story.

Maybe more of those readers will start fact finding for themselves in future.

[UPDATE 12 August 1610 hours: the Guardian has confirmed that Argentina does indeed have a "non-permanent" seat on the UN Security Council, as I pointed out. Spain would give some diplomatic support to the Argentines for their position, of wanting talks on the future of the Falkland Islands, which would mean changing its current position, but would achieve the quid pro quo of getting the status of Gibraltar raised at the top table.

Of course, the Gibraltar authorities could just fish out the concrete blocks - the water is apparently no more than five metres deep there - and thereby allow everything to return to what passes for normal. And I doubt there will be much in the way of "legal action" against Spain]
Posted by Tim Fenton at 17:20

Wonder who is more worried bout a tiff - the Spanish fishing industry or the UK offshore financial industry?