One hesitates to give too much attention to James “saviour of Western civilisation” Delingpole – for starters, he enjoys it rather too much – but when he asserted that arguments on Twitter were “another proxy battleground for the future of Western civilisation”, thus demonstrating that my characterisation of him is accurate, and that he has travelled beyond Barking on the District Line, the temptation was too much. 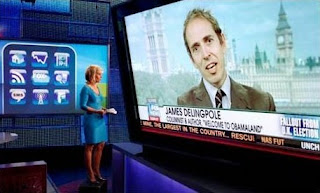 As I pointed out yesterday, Del Boy considers himself to be incredibly funny, and is quite prepared to devote whole postings to denouncing anyone passing adverse comment on his riotously amusing Weltanschauung. Especially Labour MP Stella Creasy, “who can't seem quite to make up her mind whether she is a delicate wallflower in need of protective regulation or a feisty, fearless interweb provocatrice”.

That he had just executed another prime example of misogyny did not enter: instead Del rails against his critics: “The general verdict was that I was immature, mentally ill, devoid of love, psychologically damaged, inadequate and DEFINITELY NOT FUNNY”. But this was not a big problem, because they were all “shrill, angry, politically motivated, logic-proof, blinkered, standard issue greeny-lefty trolls”.

Delingpole “politically motivated”? Perish the thought, and keep that big UKIP poster out of view, eh? But Twitter arguments matter, he protests, because “every one of these issues serves as a proxy battleground for a much broader, and much more important conflict which is raging around the world right now and on whose outcome the future of our fragile civilisation depends”. Wibble.

At which point the thought enters that Del Boy has delusions of more than adequacy. But he really believes that this is a battle between “an ‘enlightened’ elite of bureaucrats, technocrats, petty officials, social workers, Local Agenda 21 groupuscules, administrators, UN and EU apparatchiks, Guardian editorial-writers, grandstanding politicians and members of the BBC Trust” and his side.

Who they? Well, these are the folks wanting to be “left to live our lives the way we want to live them, unencumbered by confiscatory taxes, Nannyish government edicts and pettifogging regulation which seeks to micromanage every last detail of our daily existence from how many different coloured bags we put our rubbish in to the degree to which we're permitted to be rude towards our enemies on Twitter”.

And he’s sure this is a real battle: “Ultimately, it's about liberty v tyranny; about freedom of speech v creeping state control; free market capitalism v anti-growth collectivism; personal responsibility v suckling on the teat of the state; optimism v pessimism”, to which I call bullshit. He got called out for another act of misogyny, and he doesn’t have the cojones to admit it and say sorry.

But the apologia keeps him out of trouble for a few minutes, so that’s all right, then.
Posted by Tim Fenton at 10:01