The bleatings of Nile “Chauncey” Gardiner at the bear pit that is Telegraph blogs have passed before my examination before, notably when, in June, he failed to do his homework and asserted that JFK had given his Ich Bin Ein Berliner speech at the Brandenburg Gate, which he could not have done, as that location was on the other side of the wall, in East Berlin. 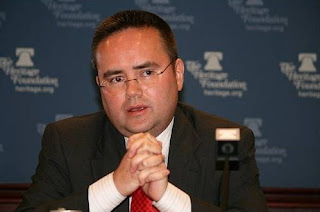 Someone at the Tel – I’m looking at you, Damian Thompson – belatedly corrected Gardiner’s copy, but you can still see the joins. And there is only so much that can be done to cover the tracks of “Chauncey” and his trail of forthright idiocy, as a spate of recent posts illustrates, starting with “Barack Obama’s handling of the Syria crisis has been a disaster – a few airstrikes won’t change that”.

Readers are supposed to believe that the Obama presidency has “led from behind” on Syria, then told that airstrikes will make no difference. Given that a large majority of citizens doesn’t want to get involved at all, and that the only other alternative would be a ground invasion, the Prez has judged things reasonably well. Gardiner is just whingeing for the sake of it (because Obama is a Democrat).

The whining continues with “President Obama’s flat and uninspiring message to America: I have a big government dream”, and Gardiner observers will not be surprised to learn that the “big government” is entirely his own invention, as he, along with other right-wingers, attempts to lay claim to being part of the Martin Luther King Jr fan club (nobody from the GOP turned up at the fiftieth anniversary bash).

But it’s when he turns his attention to the latest developments on Syria that Gardiner demonstrates his effortless stupidity. First comes the observation “Ed Miliband looked lightweight and out of his depth during Syria debate”, following which Mil The Younger helped to inflict sufficient damage on Young Dave as to have the paper that carries Gardiner’s blog describe the latter as having been “humiliated”.

Never mind, perhaps he could do better on the Stateside angles? Sadly not, as “Why a nervous Hillary Clinton is remarkably silent on Syria” shows. Yeah, she’s supposed to be the Democrats’ front runner for 2016, and she’s not said anything about Syria. There is a very good explanation for this: she is no longer in office, and John Kerry is. So she’s leaving the Syria interventions to him.

And then comes the piece de resistance: “Barack Obama is proving an embarrassing amateur on the world stage compared to George W. Bush”. Dubya Bush? The bloke who froze for several minutes when told of the 9/11 attacks? The one who let the neocons run the show, to such disastrous effect? Gardiner is holding him up as some kind of exemplar? Just f*** right off, Chauncey.