“True, Mr Bloom may have spoken injudiciously, but ...” says Daily Mail Comment, the authentic voice of the Vagina Monologue, this morning. Yes, as I noted yesterday after Stephen “Miserable Git” Glover asserted that Bloom had spoken for the well-known Mail device, the silent majority, Godfrey Bloom was not merely another UKIP “fruitcake”, he was only telling “the truth”. 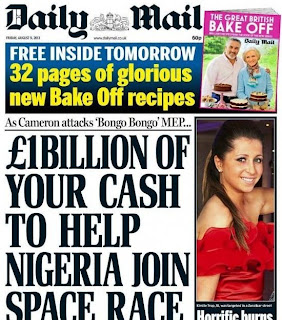 And to demonstrate this “truth” to the Daily Mail’s readers, those who are frightened and credulous enough to not only pay money for the paper, but also believe what it tells them, has come “As Cameron attacks 'Bongo Bongo' MEP... How £1billion of your cash is being used to help Nigeria join the space race”. Yes, those corrupt colonials are taking YOUR money and spraying it up the wall!

How so? “Nigeria is spending millions to put a man into space – as Britain hands it more than £1billion in foreign aid. The oil-rich country, which has accepted £300million this year alone, has set in train ambitious plans to launch its own rockets. And the first Nigerian astronauts are being trained to join Russian, Chinese or American missions within the next two years”.

And there are critics, well, there’s rent-a-quote Tory MP Philip Davies, and Jonathan Isaby from the so-called Taxpayers’ Alliance, telling that “Taxpayers find it especially unacceptable when their money is sent abroad as aid to developing countries which then somehow find sufficient cash to fund the likes of a space programme”. You went and asked a few taxpayers, Jonathan? No, thought not.

So you should, by now, be really, really annoyed, and if you’re not, along comes Michael Burleigh, another creative re-teller of the past, to pontificate “A country so corrupt it would be better to burn our aid money”. It would? “Frankly, we might as well flush our cash away or burn it for all the good it’s doing for ordinary Nigerians”. By now, the average Mail reader will be convinced.

And if not, there is always Daily Mail Comment to stiffen their backbone: “The country’s political class is among the most corrupt on Earth – starving its citizens while growing rich by siphoning off its vast oil revenues. Yet the UK is handing Nigeria double the £500million ministers scraped together yesterday to try to prevent a winter crisis in our own A&E departments”.

Yeah, we’re handing all that money to those corrupt Africans! Or maybe not: buried at the end of the Mail’s article, where most of the readers won’t see it as they will have already made up their minds, is this comment from the Government: “No UK aid money goes through the Nigerian government. Our investment goes into specific health, education and poverty reduction programmes”.

So the Mail is just indulging in shit stirring once again. No change there, then.
Posted by Tim Fenton at 10:03

There is an argument that can be made where a country is oil-rich they should be first investing in 'specific health, education and poverty reduction programmes' and only when that most basic need is provided for the people then spend money on more grandiose schemes.

Neil
But if that country (Nigeria) doesn't spend that money of healt, eductation etc; should the UK not still use it's aid budget to assist people through NGOs so that some of that poverty reduction is provided.
Also the main story is effectively incorrect £1Billion of UK aid budget is NOT being spent on the Nigerian space programme.

I am a Nigerian. I grew up in Nigeria and I must tell you that nothing has changed - infrastructure and mentality of a common Nigerian.

You are right to state that £1Billion of UK aid budget is NOT being spent on the Nigerian space programme, but this is a country that has all the resources to move itself out of poverty - money, natural resources and intelligent manpower. We don't need space programmes yet. We need a good transport system, a better health care system, better education, steady power supply.

Assisting people through NGOs is doing Nigeria more harm. The poor masses (those who eventually get it, that is if anyone does) are distracted by the aids, they hope and depend on them. This shouldn't be the case. They should be able to speak up and put an end to the wasteful use of the country's resources. At the other end, the 'leader' believe that countries like UK will send aids and therefore continue with their looting jamboree.

Neil you are probably right, in my opinion, but I don't know ANY government that does that. The USA has very high levels of poverty!

Nonso
Clearly as a (or former) Nigerian national I am happy to defer to your better knowledge of the politics of Nigeria.
However, the original article and the blogpost in question relate primarily to the politics of Great Britain.
The question of how much foreign aid in general terms is also an important but separate question. You may or may not be right that aid results in a dependancy culture.
Also the question of corruption (looting jamboree?) could also be partly turned around; ie to what extent are those paying corrupt officials (eg oil companies) responsible for that corruption? But that is also a separate question.
Ultimately the question of aid by UK governments is part of the Gleneagles commitments and based on The UN statment that "that donors should commit to reaching the long-standing target of 0.7 percent of GNI by 2015"
Hence, when newspapers defend the Politicians such as Godfrey Bloom who use language in such a way as to generate controversy in the UK they are ignoring the facts in order to sell a story. I believe that is the main point of the blog post by Zelo Street.

Memories!
"I am Dr. Bakare Tunde, the cousin of Nigerian Astronaut, Air Force Major Abacha Tunde. He was the first African in space when he made a secret flight to the Salyut 6 space station in 1979. He was on a later Soviet spaceflight, Soyuz T-16Z to the secret Soviet military space station Salyut 8T in 1989. He was stranded there in 1990 when the Soviet Union was dissolved."
SNIP
"In the 14-years since he has been on the station, he has accumulated flight pay and interest amounting to almost $ 15,000,000 American Dollars."