The ability of the Mail to be highly selective with its facts, and to slip in the odd whopper when the hacks think no-one is looking, is well known. So is the paper’s visceral dislike of the Liberal Democrats, with Corporal Clegg getting it in the neck whenever the obedient hackery of the legendarily foul mouthed Paul Dacre can work in a negative reference to him. 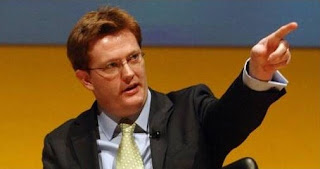 Yesterday, these strands converged as Matt Chorley penned a highly inventive hatchet job on Treasury Secretary Danny Alexander. Here, the Mail’s all-too-susceptible readers were fed the line that Alexander had been indulging in “pork barrel” politics: his constituency had been benefiting disproportionally. He had been “accused” of “funnelling millions to shore up votes”.

A number of exhibits were paraded before the readers, and I admit sufficient knowledge of two of them to know that Chorley is talking out of the back of his neck. Let us start with the CairnGorm Mountain Railway, which, it is claimed, has been exempted from the Climate Change Levy. It is also claimed that it is the only tourist railway to be so exempted.

Bang to rights? Er, not quite: the Climate Change Levy is all about consumers of electricity, and very few tourist railways (think all those narrow gauge ones in Wales, or the Bluebell Railway) use electric traction. Of those that do – heritage tramways and cliff lifts, for instance – you would be equally hard pressed to find one that bought its electricity from a renewable source (hydro-electric, for instance).

So there is a very good reason why the CairnGorm Mountain Railway is the only one of its kind, but as others do deals with green energy suppliers, there will be more to come. Then the Mail homes in on the Caledonian Sleeper, the overnight train service connecting London’s Euston terminus with cities and towns north of the border. £50 million found for refurbishment, and it “terminates in Inverness”.

Still, it convinces the average Mail reader, so that’s all right, then.
Posted by Tim Fenton at 10:26

It was an FT story that the Mail lifted.

Daily Mail weren't the first to have a go...
http://politicalscrapbook.net/2011/03/budget-bribes-more-state-subsidy-for-danny-alexanders-railway/

All 5 portions of the 2 Caledonian Sleepers serve LONDON. Can you imagine what would be said if they were cut back to Birmingham (which logically has a better connecting catchment market).

And the subsidy for them is from the Scottish Government which Alexander isn't part of. Perhaps the "Home Counties Gazette" hasn't noticed that Scotland has a government.