Determined to bounce back from his slap down by the Press Complaints Commission (PCC), the Maily Telegraph’s “London Editor” Andrew Gilligan has once again gone after elected Tower Hamlets Mayor Lutfur Rahman with all guns blazing, trotting out the “extremist-backed” meme and putting Rahman’s photo at the top of his post. But Rahman is not involved in the story Gilligan is pushing.

Rather, this is guilt by association, and even then the story is only there because the person concerned is all of Tower Hamlets councillor, Asian, Muslim, and associated with a company which has been placed into voluntary liquidation. Gilligan tells that this is A Very Bad Thing, and that monies supposedly owed to HMRC are part of a zero sum game to be set against councillors’ allowances.

So eager is Gilligan to smear Rahman that he manages not to notice that no criminal activity appears to have occurred, nor that had the businessman concerned not been Asian and Muslim and associated with Rahman, he would not have given the matter a thought, let alone any coverage. This post has only been published because Gilligan can’t get over his censure by the PCC and so is lashing out at his accuser. 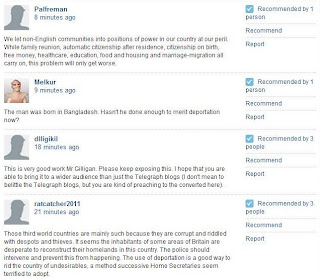 His commenters are equally eager to wade in with a slew of casually racist observations. Here, one commenter asserts “We let non-English communities into positions of power in our country at our peril”, and then suggests that “free money [and] food” are involved. Two other beacons of tolerance call for deportation. 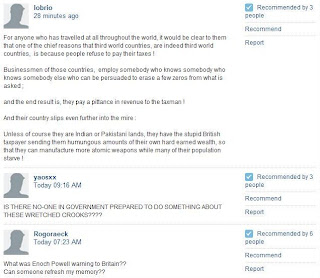 And here, one commenter infers corruption, then suggests that “Indian and Pakistani lands” are sent “humungous amounts of ... wealth” by British taxpayers. A second contributor talks of “crooks” while a third – there has to be one – reminds us all about the supposed prescience of Enoch Powell. 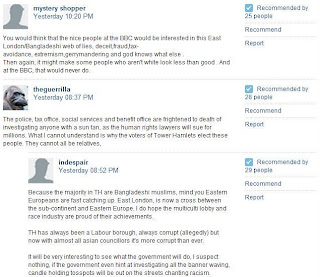 But, as the man said, there’s more: here, the first commenter asks why the BBC does not investigate (maybe the Beeb isn’t carrying on a personal vendetta against Lutfur Rahman? Just a thought), then concludes that “it might make some people who aren’t white look less than good. And at the BBC, that would never do”.

This, though, is merely the warm up act: the next to speak up tells that the authorities “are frightened to death of investigating anyone with a sun tan” and another replies “East London is now a cross between the sub-continent and Eastern Europe. I do hope the multiculti lobby and race industry are proud of their achievements ... [Tower Hamlets] now with almost all Asian councillors it’s more corrupt than ever ... banner waving, candle holding tosspots”. All these comments have been recommended.

Once again, the bear pit that is Telegraph Blogland shows itself to be a repository of racist bigotry. I suspect this will be excused by citing free speech and suggesting that anyone disapproving does not have a sense of humour. It won’t wash.

There is never any excuse for racism. It is not funny, not clever, not witty and not acceptable.