The increasingly cheap and nasty Express has today returned to its chief source of inexpensive knocking copy, that being the EU and particularly the Eurozone. That much is not new news, but the combination of deception and less than independent talking head is unusual: it’s strange for there to be nobody available from UKIP or the usual Tory fringe MPs and MEPs to back up the assertions made. 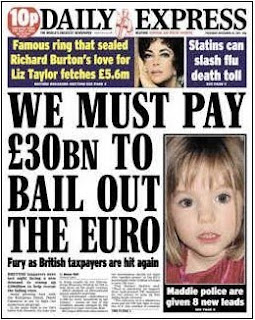 And the thundering headline is typical: “We Must Pay £30Bn To Bail Out The Euro” is the introduction to yet another rant by political editor Macer Hall. Terms such as “new demand” and “audacious proposal” underscore the compulsion angle. But after regaling the punters with tales of how the Euro was tanking – a whole two and a half cents more for your Pound Sterling – the detail was rather different.

Because buried in the rather smaller text is that “Britain could be expected to hand over up to £30 billion” and “Britain could be liable to contribute up to £10 billion under existing commitments”. So the maximum that could be guaranteed – not “handed over” is £10 billion. That hardly justifies the screaming headline, but hey ho, this is the Express on autopilot we’re talking about.

And in any case, there are “Angry MPs” to back up the piece. Well, actually, there is just one, Kate Hoey, who is quoted approvingly because, unlike most of the screaming Europhobes, she is a Labour MP. There is also Tory MP Stewart Jackson, but here a vested interest enters. Jackson, who represents Peterborough, is married to Express hack Sarah O’Grady.

Ms O’Grady, the paper’s Property Correspondent, contributes the usual diet of Express fayre, talking up the housing market, frightening the elderly, and of course putting the boot into the EU. Her husband, to quote the Wiki entry, “has regularly been interviewed for stories that have appeared in the Daily Express, or has written articles for the paper himself”.

Moreover, Jackson has form over his expenses – his swimming pool was deemed worthy of taxpayer funding – and over his righteous attitude to sex education. More recently, he has encountered a little local difficulty over his use of Twitter. More discerning newspapers might have wondered, but the Express’ appetite for anything they can get for free clearly trumps discretion.

So in go Jackson’s comments, thus doubling the number of allegedly “Angry MPs”. Which means only one thing at the empire of Richard Desmond: another Benchmark Of Excellence.