Cole And The Kuttner Moment

As part of his efforts to promote Flat Earth News, Nick Davies did the rounds of the radio and TV studios back in January 2008. During one discussion, Davies touched on “The Dark Arts” and was immediately challenged by a fellow panellist. “Nick Davies lives on another planet. What’s he talking about? It was one journalist at News Of The World, who did it once, and he was fired and went to prison”.

That panellist was Stuart Kuttner, then managing editor of the Screws, who has since been arrested – twice – as the Met has investigated via Operation Weeting. His aggressive and defensive tone told Davies that he had something to hide, and sure enough the information began to roll in very soon afterwards. Despite the denials, we now know that Kuttner had let the cat out of the bag.

That episode came to mind yesterday as a supposed leading light of the blogosphere lost it in fine style on Twitter, that being Henry Cole, tame gofer to the perpetually thirsty Paul Staines at the Guido Fawkes blog. Cole was being wound up, and I was a full participant. Such activity on Twitter is not exceptional. The petulant and defamatory response, however, certainly was. 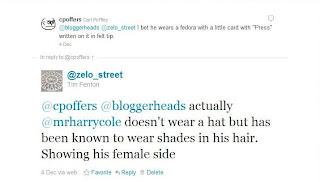 Cole’s claim to be a “journalist” was being questioned. Carl Poffley wondered if Cole wore a hat with “press” on it. I replied that he didn’t, but had been known to wear his shades in his hair, this being my recollection of his appearance at the Huffington Post UK launch party (read about it HERE).

Matters rapidly went downhill: Cole then made a “stalker watch” comment, only to be called out by unslugged. 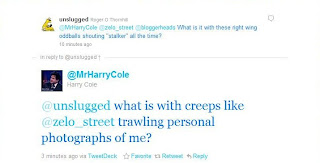 In response, Cole made an untrue assertion about “trawling personal photographs”, with a side order of abuse. 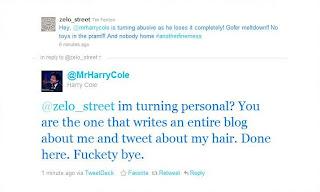 In response to more winding up, he became incoherent, making another untrue assertion (“writes an entire blog about me” – hell, that would be boring) and deploying an expletive in pretending to sign off. 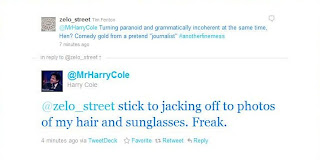 He then surpassed himself with a particularly defamatory suggestion, tailed with yet another round of abuse. This generated much adverse comment from others.

All of which only goes to reinforce the thought that Cole has something to hide. Why otherwise react in such an incoherent and defensive manner? Now, what he is so touchy about I do not know, and nor do I pretend to. Nor do I have any preconception as to what is causing this august pillar of the right leaning blogosphere so much anguish.

But what I do know is that Henry Cole has drawn attention to himself when he did not need so to do. This gives every appearance of being his Stuart Kuttner moment.

^ o-0 Yes, Luke, but this entry wasn't here, or at least was not accessible to me, when the comment was made.

See also: Nadine Dorries' assertion that Mr Ireland's first attempt to make contact, to ask why, in view of the negative effects on uninvolved parties, she had unjustifiably accused him of stalking her, was proof that he was doing so.

Sorry if that's pushing it, Mr. Fenton. The apparent similarity gets to me, although my perception of the timing involved here may be off.