Despite its dwindling circulation and cheap and nasty presentation, the Express family of newspapers turns a profit for owner Richard “Dirty” Desmond. This has been achieved by vicious staff cuts – there are few sub-editors to catch the spelling and grammar howlers – and running the cheapest stories. And these don’t come cheaper than recycling press releases. 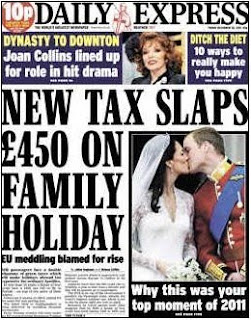 Today, the Express has found a press release to churn over which also enables the Desmond hackery to kick the EU, as it proclaims “New Tax Slaps £450 On Family Holiday”. And just in case anyone missed it, there is the follow-up sub-heading “EU Meddling Blamed For Rise”. So what is this “new tax”, and how does it “slap” £450 on a typical family holiday?

The answer is that there is no definitive “new tax”, and it therefore does not “slap” [present tense] any additional charge on any holiday, which should come as no surprise to Express watchers. There is, however, a factual morsel buried beneath this freshly steaming pile, and that is the inclusion of aviation in the European Emissions Trading Scheme (ETS) from the start of 2012.

This, though, is not told at the outset as the piece begins “Air passengers face a double whammy of green taxes which will make holidays abroad too expensive for ordinary families”, which assumes that all families going abroad fly, and go to Florida: “in less than 10 years a family of four could face a £452 tax bill to fly to Florida”. So this “new tax” doesn’t “slap” anything [present tense].

Moreover, the worst case scenario that the Express uses to back up their headline is that “By 2020, the price of a long-haul return ticket could rise by up to £39.60”. Multiply by four for that notional “family”, and you get around £160. So at some time in the future, a press release from ABTA says that a family of four might have to pay up to another £160 – not £450. And “up to” includes zero.

The rest of the supposed £450 is comprised of Air Passenger Duty (APD), which gives the Express a problem, as this is in the gift of the Chancellor of the Exchequer, and nothing to do with the EU. And at no time does the paper allow the thought to enter that air carriers don’t pay fuel duty, nor that doing less air travel over time might turn out to be A Good Thing.

Plus they can muster only one talking head not connected with the airline or wider travel industry, and it’s a predictable one: Tory MP Peter Bone, who does not allow the thought to enter that the ETS affects all 27 EU member states, not just the UK. And carbon pricing mechanisms are being brought in elsewhere in the world, but that would make things too complicated for Express hacks.

Misleading churn of PR for a cheap splash? Another Benchmark of Excellence.