A Christmas One In The Eye

A Twitter conversation yesterday and today prompted this post: Hopi Sen had been talking about political cartoons, and the great masters that inspire them. I recalled a Private Eye cover by Steve Bell in the style of Peter Breughel the Elder, but the problem was finding it. This task has now been accomplished, and for good measure, Bell’s Christmas Eye cover from the following year is included. 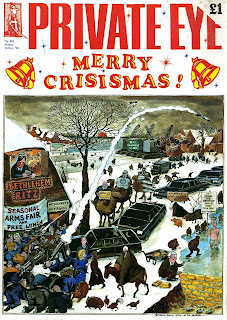 Eye 861: click for larger image
The Breughel cover is from 1994, with “Shagger” Major’s premiership already mired in traditional Tory sleaze. At the “Bethlehem Ritz” are Jonathan Aitken, David Mellor and Virginia Bottomley, and out front is a convocation of fat cats scaring the pigs from the trough. Douglas Hurd is building a dam, with Major (in just his Y-Fronts) caricatured as “John The Dentist”.

Margaret Thatcher and son Mark are turning away the Mary and Joseph figures from the celebrations (directing them to the “Bethlehem Ritz Single Parent Unit”), while in the background, there is a “Bethlehem – Twinned With Ebbsfleet” sign and houses can be seen being demolished to make way for the “M11 Gomorrah Link”. Group 4 are removing protesters from trees. 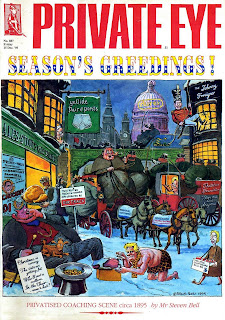 Eye 887: click for larger image
The following year, rail sell-offs were on the go, so Bell produced this “Privatised Coaching Scene” featuring more fat cats, together with Margaret Thatcher, Ken Clarke, Michael Portillo, “Tarzan” Heseltine, Virginia Bottomley (as “the little scratchcard seller”), with “Shagger” Major shown as a waiter and Michael Howard emptying a chamber pot on the Three Kings.

There is an early use of the condom – as an advert on St Paul’s Cathedral – and the Major Y-Fronts this time appear on the pub sign “Ye Olde Pair Of Pants”. The Prince of Wales’ difficulty with Diana appears as a panto advert (“Chuckoff and Di”) while in the foreground there is an early portrayal of Tone – as a fat cat’s lapdog. And there is the Eurostar, preceded by a man with a red flag.

The detail of these covers – click on either for a larger image – is what makes them. Having seen the effort that Steve Bell puts into one-off cartoons for the Guardian, I can imagine these were a real labour of love. Enjoy!
Posted by Tim Fenton at 14:32