One particularly indignant Twitter user was not at all pleased about yesterday’s Zelo Street post on the photos appearing to show Charles Saatchi publicly assaulting his wife – and Domestic Goddess, which means Public Property – Nigella Lawson. Where was my forthright condemnation? Was I condoning domestic violence? Why wasn’t I taking sides? 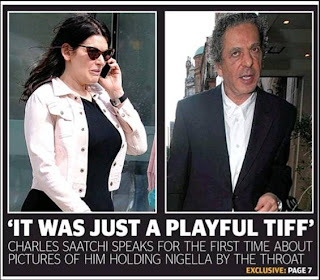 This blog does not condone any kind of violence, and is especially harsh on men who do what Saatchi appeared to be doing. And, as with so much else, giving the subject enough rope can result in them riding to your rescue while simultaneously stringing themselves up with it: today Saatchi has made a most unwise move in an “exclusive” for the Evening Standard.

Yes, Saatchi has admitted that he did indeed have a row with Nigella, and moreover has gone on record in saying “I held Nigella’s neck repeatedly while attempting to emphasise my point”. Then he digs himself in substantially deeper: “There was no grip, it was a playful tiff”. There’s nothing intercoursing playful about grabbing a woman by the throat, Charlie boy.

Can he dig just a little bit deeper? You betcha, says Sarah: “The paparazzi were congregated outside our house after the story broke yesterday morning, so I told Nigella to take the kids off till the dust settled”. He didn’t talk to her and come to an agreement to do something – he told her what to damn well do. Perhaps Saatchi believes his wife is some kind of chattel.

Well, whatever his belief, Saatchi has admitted that he assaulted Nigella, and that he does not consider it unusual to instruct her as to her movements. In this he has achieved two things: given the Metropolitan Police the green light to call him in for a chat – of a “playful” nature, you understand – and ensured his alienation from anyone who had not previously pronounced judgment on the affair.

Meanwhile, Scott’s Of Mayfair has deployed a straight bat: “The staff and management at Scott's are aware of the reports in the media and would like to make it clear that they did not see the alleged incident nor were they alerted to it at the time”. Quite. I wouldn’t be blowing a hundred quid a head including drinksh without knowing that the gofers could be relied upon to keep schtum.

And snapper “Jean-Paul” has now seen his photos adorning the report in the Mail, along with appropriate attribution, thus demonstrating that, whether shocked pundits approve or otherwise, it is far more rewarding to keep well away from rowing couples and just loose off the SLR instead. As for Charles Saatchi, well, he’ll find that there’s one thing money can’t buy, and that’s the winning over of public opinion.