A country within the EU and which has adopted the Euro doing well? This discovery has seriously taxed Dan, Dan The Oratory Man, who has looked at the Austrian public sector’s 44% of GDP, the unemployment rate of less than 5%, and as a result appears baffled. In the free market conventional wisdom, such figures are by definition incompatible. And there’s worse to come. 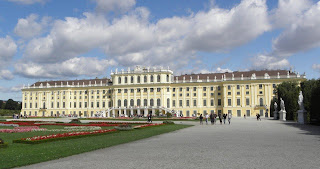 Per capita income is the second highest in the Eurozone, with only Luxembourg doing better. Hannan observes that his fellow libertarians are uniformly predicting a breakdown – the usual reaction of such people to this apparent heresy – and then sets out to understand why. And on most counts he is well wide of the mark, except for his touching on Austria’s closeness to its former Communist neighbours.

The closeness, especially to Hungary, is not merely one of being the country next door: until 1918 they were part of the same empire. Business continued despite the Iron Curtain: when Budapest’s Cogwheel Railway renewed its fleet in the late 70s, the trains were built in Austria. Transport links between the two countries remained good and were already improving when Communism fell in Eastern Europe. 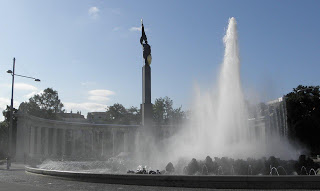 Hannan touches on the federal structure of Austria: this, too, helps, with many powers, especially building and planning, entrusted to federal parliaments. But one income source that he doesn’t mention is tourism, and for Austria this is the second greatest source of national income after manufacturing industry. The money rolls in all year round: winter sports, city breaks, summer getaways and festivals all feature.

And the economy is mostly powered for free: more than half Austria’s electricity comes from hydro power, and almost 63% of it in total from renewables. The country’s neutrality means less than 1% of GDP is spent on defence, with military deployments limited to UN peace-keeping and humanitarian purposes, including national emergencies. 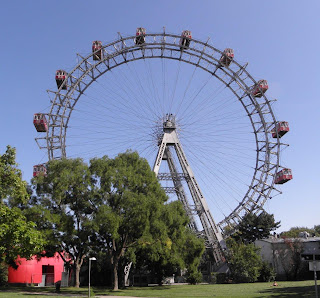 Big wheel in the Prater Park

But what has ensured Austria takes a pragmatic approach to its economy more than any other factor is that, firstly, it effectively started with a blank canvas in the 1950s after occupying Allied forces (including the Russians) had left, and secondly, that all Hannan’s economist heroes had long before left their homeland to preach what J K Galbraith called “the traditional irrelevancy” elsewhere.

So while the names of Hayek and von Mises are lauded at get-togethers in Vienna, the real-world business of managing the economy goes on, generally, without reference to them. Austria prospers not because of the Austrian School, but despite it. That’s something for Dan to think about when he catches the publicly run U-Bahn out to Schönbrunn for a free walk round the publicly maintained gardens.

But you won’t see such heresy at Telegraph blogs any time soon. What a surprise.
Posted by Tim Fenton at 12:41

The other thought i had was that Hannan and co believe that all Austrians follow Austrian economics and so, all Scots must want to embrace a particular interpretation of Mr A Smith but are prevented from doing so by the Marxists holed up in Whitehall. But surely, no one could be that dim not even on the Telegraph blogs?