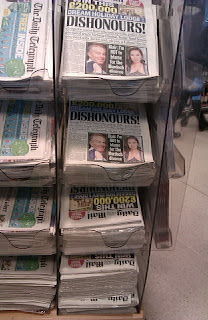 
So are the Mail and Tel selling quite as many copies as their PRs would like us to believe? You might wish to ask that. I couldn’t possibly comment.
Posted by Tim Fenton at 08:41

We are local to Petersfield and regularly use the Waitrose in the town. A very nice town and store it is too. I cannot remember when it started but for the past few months they have been dishing out a free copy of the Mail or Telegraph on weekdays to all holders of the My Waitrose card. My wife who is our food shopper sometimes takes a Telegraph and tells me that picture could have been taken on any day of the week.

The stacks of Mails and Telegraphs are because of the on-going offer for Waitrose card holders to get a free copy at the checkout.

Like giveaways on aircraft, it is a well-known way for publishers to boost their "sales."

The Waitrose link up has been running for more than six months, no sign of it ending soon. See http://www.waitrose.com/home/mywaitrose/newspaper_offer.html

I was in the York branch of WHSmith yesterday. They offered me a free copy of the Daily Mail. I told them they'd have to pay me to get me to take one

There's been an offer at WH Smith airports and stations (possibly High St for all I know) for over 2 years. Buy a Telegraph and get a 500ml Evian for free. Given the price of the Evian at airports the obvious thing to do if you want some is pick up the Telegraph and get that scanned instead - and hey presto, one more "auditable" sale of the Telegraph.