All Aboard The Malignant Express

I’ve previously passed adverse comment on the Maily Telegraph’s point man on matters EU, Bruno Waterfield, for his occasionally creative interpretations of proposals emanating from the European Parliament – thus carrying on a Tel tradition started in earnest by London’s occasional Mayor Alexander Boris de Pfeffel Johnson – so when he denounces something, things must be bad. 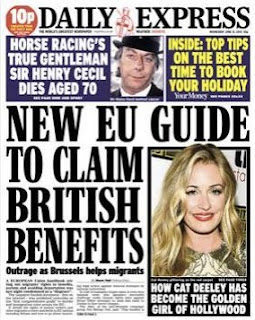 And so it came to pass, as Waterfield was particularly severe on Richard “Dirty” Desmond’s dwindling band of hacks at the Express today for their latest EU front page horror story, “New EU Guide To Claim British Benefits”, describing it as “malignant, factually wrong and utterly specious”. The only surprise is that it’s the man from a paper hostile to the EU that is saying it.

So what is the source of the Express’ ire? It’s the “Handbook on European law relating to asylum, borders and immigration” [.pdf], and is available in four languages at present (English, French, German and Italian) with seven more translations to come, although the Express wrongly asserts that these are already available. And the Express at one point correctly identifies the target audience. 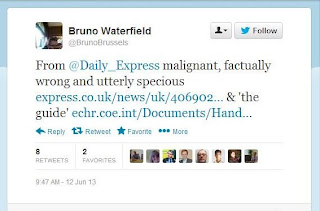 “It is aimed at lawyers, police, border guards, immigration officials and any organisations dealing with immigration law”, the article tells readers. And what the Express does not tell is that the benefits part (Section 8.6, “Social security and social assistance”) is four pages out of more than 250. This basic level of investigation is missed by the Express – and its chosen talking heads.

These, to no surprise, are Tory MP Peter Bone, no doubt with the approval of Mrs Bone, Nigel “Thirsty” Farage – a large and suitably statesmanlike photo of the Express’ hero is also thoughtfully provided – and an attention seeking buffoon called Tim Aker from a group called Get Britian Out, who can be relied upon to howl in protest, on cue, at anything remotely EU related.

All that the volume in question is doing is to give those dealing with migration issues a summary of the potential laws involved. If it were about encouraging migrants to claim benefits, there would not be sections such as “Preventing unauthorised entry” (Section 1.2) and “Push backs at sea” (Section 1.7). Given those headings, it could be argued that it’s a handbook for keeping people out.

Moreover, none of the cases quoted in the small section on benefits involve the UK. So it is hardly surprising that the European Commission’s London office, which routinely rebuts the Express’ torrent of anti-EU articles, has decided not to reply to this particular steaming pile of journalistic excrement. Thus they have decided to heed the wise words attributed to Lyndon Johnson.


Never get into a pissing competition with a skunk.
Posted by Tim Fenton at 16:54