Much was written about yesterday evening’s BBC Wonderland documentary Young, Bright and on the Right even before it was broadcast, and mainly by the same Right as a damage limitation exercise. But the programme was not nearly as unsympathetic as some believed it to be, and the amateur smear merchants left sufficient fingerprints to make their presence all too obvious. 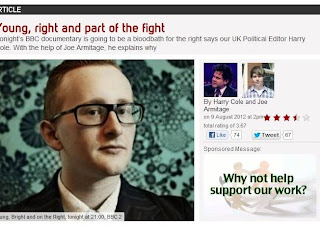 Warning: only one of these young people is genuine

The subjects were two former comprehensive school pupils who try to get on in the Conservative politics of Oxford and Cambridge Universities. Most attention has since focused on the one who went up to Oxford: Joe Cooke, whose family live in the woollen district town of Mirfield, who took his degree in PPE, and who rose to head the Conservative Association at the University.

Once you saw Cooke’s background and some of the family who had supported him, you saw that he was a truly exceptional person: he had battled dyslexia and dyspraxia to achieve nine A* GCSEs and four A grades at “A” level. His condition meant that he attended a primary school for children with learning difficulties. To achieve what he did takes sheer inner steel, and then some.

Bear that in mind when observing the spin and smear, but be warned: it may make you as angry as it made me. First came the spin, with flannelled fool Henry Cole, fresh from feeding his electricity meter – and remember, he isn’t really a Tory, as he says so – whingeing in The Commentator that the Oxford and Cambridge associations weren’t representative and that the dastardly BBC had set them all up.

This was before Cole, or his accomplice Joe Armitage, had seen the programme, so how either knew what was to come is unclear. But then came the comments, and many of these, too, appeared before the documentary aired. This is where it gets really nasty, and obviously so. Responding to The Commentator piece was someone calling themselves “Former OUCA Senior Officer”. 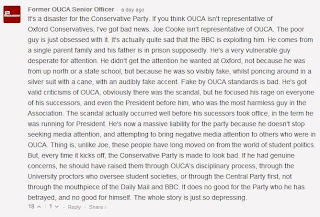 This commenter said “He comes from a single parent family and his father is in prison apparently”. Anyone who had actually been at Oxford with Joe Cooke would have known that his father had in fact served his time some years previously, and that he had died in 2007. This is such an obvious piece of sock puppetry, and a clumsy and amateurish one at that. Ditto the similar “Former OUCA Officer”. 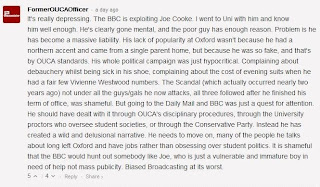 ... and spot the lack of difference

And the last one to pass judgment on student politics is the odious and terminally dishonest Henry Cole, whose campaign for the top job at Edinburgh University Students’ Association (EUSA) was the dirtiest and most vicious kind of gutter politics. Perhaps The Commentator will investigate the sock puppeting, but somehow I doubt that we will see anyone own up to it, even if they do.

I wish Joe Cooke God’s speed – and hope he learns well from these experiences.

[UPDATE 11 August 1730 hours: considering the disdain some pundits showed towards the BBC documentary, there's still an awful lot of attention being given to the subject. Over at the Spectator, Douglas Murray is trying to find a different and more thoughtful angle, that of loyalty to "the party".

At Telegraph blogs, Guy Stagg, who looks frightfully posh, tries to get away with asserting that "There's nothing posh about being a Tory" in an otherwise confused post. But at least Stagg has attempted to be of original thought, unlike Alex Singleton at the Mail.

"Student Tories across Britain have a new hate figure" he tells, having asked precisely none of them, as he kicks Joe Cooke. Following this, he recycles much of the tittle-tattle that typified the comments in that piece at The Commentator as if it was fact. Perhaps one day he will do some real investigative journalism, but apparently that won't be happening any time soon]
Posted by Tim Fenton at 18:01

Hm. There *is* something very familiar about this. It's almost as if the attack follows a pattern:

'Mental', obviously, but also unpopular (the priorities of the author making themselves apparent here), class issues, charges of hypocrisy, political obsessive desperate for attention (may be some projection creeping in here, but that's just my view) and of course the very clear message that it's all SO depressing and boring, you'll probably want to avoid looking into any of the detail.

Can't think for the life of me where I've seen a similar pattern of attack before, though.

Specific denial of a class issue, while also making unnecessary and inaccurate reference to some aspects of his personal life, in a way that might lead to negative inferences about him, really jumped out...