Although many TV viewers may not have noticed, the increasingly tired Big Brother format has been exhumed for another series. Now under the less than benign watch of Richard “Dirty” Desmond’s increasingly downmarket Channel 5, the “Celebrity” version, mostly consisting of people very few have heard of, launched yesterday evening to the acclaim of Des’ papers, and few others. 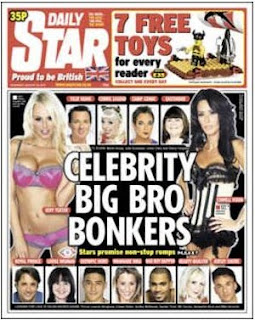 Continuing the attempts at cross-promotion, despite Des asserting in court and on oath that he does not interfere in editorial matters, the Daily Star has devoted a disproportionate amount of coverage this morning to the show, and the variety of has-beens and never-weres taking part. And the headline, “Celebrity Big Bro Bonkers”, is down to the required level of subtlety.

And it’s also down to the usual level of factual accuracy: along with the sub-heading “Stars Promise Non-Stop Romps” the suggestion is clearly that there will be a number of sex acts taking place in the Big Brother house. Sadly, though, the reality – and, after all, it is supposed to be reality TV – is rather more prosaic. It’s the usual mix of old quotes, “could bes” and “maybes”.

So who is volunteering? This time, there is more than one person with a well known name, but Samantha Brick is only there because she’s desperate for the publicity. Julie Goodyear is only well known to those of us of A Certain Age because once upon a time she spent many years on Coronation Street. And Julian Clary and Martin Kemp must be finding the offers of work drying up.

Is that it? Well, almost, unless you consider Coleen Nolan to be famous (she does daytime TV), or Cheryl Fergison, who is no longer on EastEnders. And that really is it, with the balance of the “Celebrities” made up of four blokes no-one has heard of, plus three young women who fall into the “available eye candy” category, which makes them eminently suitable for Des’ target demographic.

There will no doubt be lots more of each day’s Daily Star devoted to this show, but the rest of the tabs will quickly lose interest, along with most of the viewing public. The only way that Channel 5 would get viewers to look in is if there were one or more real Slebs on the show, but if you run an operation on a shoestring, then you won’t get anyone who’s anyone to volunteer.

That’s the reality about this particular reality TV – and one that Richard Desmond can’t get into his head. But if he comes out of this with a profit, that will mean just one thing: another Benchmark Of Excellence.
Posted by Tim Fenton at 10:59