Late next month the party conference season begins, with the Tories once again choosing Birmingham as their venue. Travellers will thus be wise not to venture inside the M5/M6/M42 ring during early October, or to get off trains at New Street except to change from one to another. But for those who consider themselves properly Conservative, the main event comes earlier.

Because on September 22 – it’s a Saturday – Windsor Conservatives are hosting a Conservative Renewal Conference. In this they have the support of The Freedom Association (TFA) and the so-called Taxpayers’ Alliance (TPA), whose former spinner Susie Squire went on LBC and told Nick Ferrari that the TPA were not Conservatives. Ms Squire was clearly being dishonest.

So, apart from confirming what most folk already knew about the TPA, who is attending this august gathering? Well, the keynote speaker is none other than Michael Ashcroft, long time backer of the Tory Party. So it’s sort of official, then. Fine. Then explain the presence of Roger Scruton, former editor of the Salisbury Review at the time when it had a “repatriation” stance to ethnic minorities. 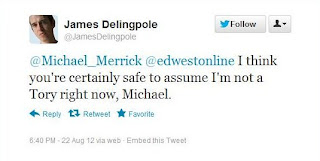 And if that isn’t enough of a circle to square, there is also the prospect of an appearance by James “saviour of Western civilisation” Delingpole, who said on Twitter yesterday “you’re certainly safe to assume I’m not a Tory right now” after he had branded Neil Carmichael, MP for Stroud, a “total wanker of a Tory MP” and a “weapons grade tosser”. There’s a party man for you. 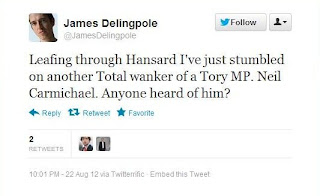 Supporting Del Boy will be his pal, the loathsome Toby Young, and also on board is occasional Tory and MEP Dan, Dan the Oratory Man, whose idea of candour is to go on Fox News Channel (fair and balanced my arse) and tell whoppers about health care. And the TPA are taking along Lee Rotherham, who you can tell as he’s a doctor, author of their mainly fictitious “report” on the cost to the UK of the ECHR.

And chairing the whole shebang will be Tim Montgomerie of ConHome, whose view of what the Tory Party should be doing is formed – as with rather a lot of the speakers – by talking among the same old jerking circle. If only the party were properly Conservative, they all tell Monty, all would be well and the electorate would love them to bits. Except reality isn’t quite like that.

Long terms of Tory Government have been when those in the centre ground – the swing voters on whom parties depend to get them in power – believed they were doing better (the 1950s) or had more opportunity (the 1980s). The ideological purity of the TPA and their desire to scrap the NHS, remove free education for all, abolish the minimum wage and lower the poverty line, will scare them off in droves.

So perhaps they should rename it the Conservative Suicide Conference, then.
Posted by Tim Fenton at 18:32

Shouldn't UKIP be there as the fellow travellers of the slavering Tory right wingers?