Back in the days before great public works became an affront to those inclined to the loudest demonstration of their politics, there was much new build added to the world of public transport in and around London. This was the time when, in the 1930s, the Underground system had been brought together in public ownership – the elimination of “wasteful competition” being one factor driving the move – and was being expanded out into the suburbs.

When the Northern Line took over the station at East Finchley, the structures were rebuilt, very much in the art deco style of the time, under the aegis of architect Charles Holden. The south eastern end of the station buildings features semi-circular glazed stairwells, and overlooking the main entrance is a large statue of a kneeling archer, designed by sculptor Eric Aumonier, who had previously designed the art deco reliefs for the foyer of the Daily Express building. 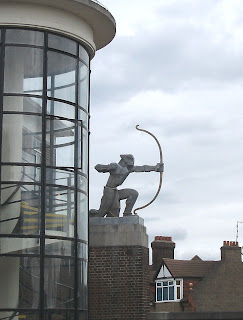 The archer has given the local newspaper its name, such is its association with Finchley. It is instantly and positively associated with the station and the area. And it is exactly the kind of work which would have the usual suspects howling “waste” if it had been commissioned today – especially given that a public body was paying. That would be a pity.
Posted by Tim Fenton at 17:43