And so the first couple of Britain First, Paul Golding and Jayda Fransen, arrived today at Folkestone Magistrates’ Court to hear the results of their earlier trial on charges of religiously aggravated harassment. As the Mirror has reported, “Golding had been charged with three counts of religiously aggravated harassment, while his deputy was accused of four offences … The pair had denied all of the charges against them”. 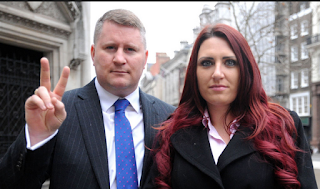 Yes, two cells, two slammers, her in Holloway and you down the Scrubs

The reason Golding and Ms Fransen had been on trial may be familiar to Zelo Street regulars: “The pair had been arrested in May last year over the distribution of leaflets and posting of online videos during a trial at Canterbury Crown Court, where three Muslim men and a teenager were convicted of rape and jailed”. That trial was also the occasion when Stephen Yaxley Lennon, who styles himself Tommy Robinson, was charged with contempt.

What was not previously widely known was that it was not just about distributing leaflets and posting videos: “Fransen was accused of going to the Kent home of one of the defendants, Tamin Rahmani, and shouting racist abuse through the front door … Rahmani’s pregnant partner, Kelli Best, said she was alone with their two children, aged three years and 18 months, at the time of the incident on May 9, 2017 … Two days later, she began bleeding heavily and her daughter was stillborn”.

Ms Best told the court, from behind a screen, “She (Fransen) was making racist remarks: ‘Dirty Muslim rapist, come out, we’re not going to leave until you’re gone, come out. Dirty scumbags’.It made me feel very anxious, I didn’t go outside for a long time. I was also pregnant at the time it happened, two days after I started to bleed heavily and lost my daughter, she was stillborn. I blame Jayda Fransen, there was no other reason for it to happen”. Some of Ms Fransen’s actions were captured on camera.

“On a video played in court, Fransen could be seen banging on the door and shouting: ‘Come out and face me you disgusting rapist, come on’”. That the target of her abuse and intimidation was not there, but his heavily pregnant partner was, will not earn Ms Fransen and her cause any Brownie points with either Judge, or public.

Golding got off on one of the charges. “Golding said he was only acting as Fransen's cameraman, and that it was her campaign … When asked if he agreed with what Fransen did, he replied: ‘Yes’ … He said in politics he gets called nasty names all the time - and claimed he had seen far worse from journalists on many occasions”.

I’m sure mainstream journalists go round taunting non-existent targets by banging at their doors and shouting through their letterboxes - or not. Given that both Golding and Ms Fransen got guilty - she on three charges - the likelihood of a custodial sentence is significant. Indeed, the judge has confirmed that “In respect of both defendants, the custody threshold is crossed”. Pre-sentencing reports are being compiled.

This means Golding and Ms Fransen could remain at large, but don’t forget - they’re both back in the dock in Belfast next month on similar charges.

The intimidation and harassment of Britain First’s leader was for a time, but not for all time.

Paul Golding was sentenced to 18 weeks' imprisonment, and given a fine of £500.

Jayda Fransen was sentenced to 36 weeks' imprisonment. That's 18 weeks and 36 weeks in jail.

Just rejoice at that news]
Posted by Tim Fenton at 16:37

Maybe "...mainstream journalists[don't] go round taunting non-existent targets by banging at their doors and shouting through their letterboxes..."

But they certainly go round hacking private computers, emails and telephones, and trawling their dirty hands through the bins of victims. All to support lying headlines, articles and far right propaganda. All of which encourages arsehole thugs and boot boys to go round taunting etc.

Leveson 2 could have helped expose more of it if Hancock hadn't betrayed decency in the usual tory fashion.

Let's hope a Labour election victory would help restore Leveson 2. If so, keep your eye on the New Labour quislings and their attempt to sabotage it. The tories of course would oppose it as they have every piece of socially progressive legislation - it's what they do and will never stop doing.

Very relevant, Anon.
Are you by any chance also 'D. Abbott'?

No, Tim. Unless there's something I've missed, they'll serve (approx) one month and two months actually behind bars followed by the same again on home detention possibly with ankle tags.
Then probation until the end of the headline time.