Sunday would not be Sunday without the routine castigation of the BBC for whatever the cheaper end of the Fourth Estate has decided to accuse the Corporation of doing, or not doing, in its inimitable why-oh-why style. What is different about today’s attack is that it has come not from the Dacre press, but the empire of Richard “Dirty” Desmond, in a front page Sunday Express lead. 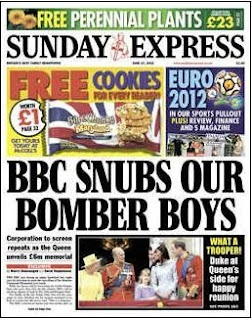 “BBC Snubs Our Bomber Boys” thunders the headline, as readers are told “The BBC was facing an angry backlash last night”, which is a pleasant change to “fury erupted”, but to no surprise does not feature in any other papers, which should put anyone considering investing a little credibility in this piece on their guard. And the timeline of the article is very obviously wrong.

The unveiling of the new Bomber Command memorial in Green Park is asserted to be happening “next week”. It isn’t: as an earlier piece in the Telegraph confirms, the date is June 28, which is the week after next. Still, Des’ finest got the occasion right. So what is the Beeb doing wrong? Well, the ceremony is being broadcast live on the 24 hour BBC News Channel, and also recorded for a later BBC2 documentary.

This news has grievously affronted the Express, whose hacks argue that only a live broadcast on BBC1 or BBC2 will be sufficient. After all, these channels, Express readers are told, “will be showing repeats of Cash In The Attic and Bargain Hunt”. Or maybe not, as further down the piece it is conceded “BBC1 and BBC2 ... will be showing live tennis from Wimbledon”.

And there’s the rub: the Corporation has to balance the viewing public’s appetite for coverage from SW19 during Wimbledon fortnight with the need to cover the unveiling of a memorial to the fallen. The decision has been taken to put live coverage on a channel which may not have the largest audience, but is widely available – you can get it on the Beeb website – with a documentary shown later.

And that documentary will be – unlike the live coverage – repeated at least annually, and also on any occasion when we remember those who gave their lives in the service of their country. It will be shown in countries across the Commonwealth. That treatment will do more to keep the memory of all those aircrew in public view than the occasion when The Queen does the honours on the 28th.

So why is the Express so hostile? Ah well. “Sunday Express owner Richard Desmond has donated £500,000 to the memorial fund to match [the] £500,000 raised by our readers”. Good of them to own up, but then, why can’t Des have it carried live on Channel 5, which he owns? Ah, but I forgot about Big Brother.

Dumping on the BBC and being a money grubbing hypocrite at the same time? That’ll be another Benchmark Of Excellence.
Posted by Tim Fenton at 13:07