Those observing last week’s deliberate and carefully orchestrated leak to the Daily Mail by Education Secretary Michael “Oiky” Gove might have thought the occasion a one-off, an independent act by a loose cannon on the bridge of the ship of state. It was not. We know this as Young Dave has done more or less the same thing by feeding an “exclusive” to the Dacre empire himself. 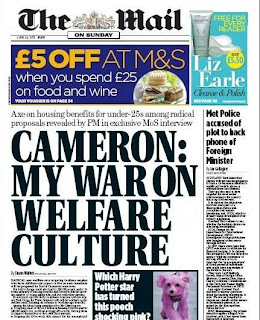 Subtlety? Stuff that for a game of soldiers

“CAMERON: MY WAR ON WELFARE CULTURE” thunders the banner headline of today’s Mail On Sunday, as under the by-line of routinely dishonest “political editor” Simon Walters (the hack who invented the totally untrue story that John Bercow’s marriage was in trouble because wife Sally had agreed to do Celebrity Big Brother) readers are told exactly what they want to hear.

Indeed, the online version spells it out in yet more graphic terms: “Cameron to axe housing benefits for feckless under 25s as he declares war on welfare culture”. So the under 25s are at a stroke defined as “feckless”, and of course readers are also fed the customary “welfare system that discourages [people] from working”. Yes, “the system encourages people not to work and have children”.

By this point, observers might have noticed that not only is the tone of this article suitably judgmental and verging on the downright hostile, but that it also meshes all too perfectly with the ideas of the legendarily foul mouthed Paul Dacre and his view of what constitutes the Mail’s “kind of people” – and what other kind of people Mail readers are intended to view in a negative light.

This matching of what Young Dave is jolly well going to do with what the Mail thinks he should – forcing under 25s to live with their parents, making the unemployed produce CVs and, well, smarten up generally, and taking benefits away if their behaviour is not in accordance with Mail editorial policy – is not an accident. And neither was Gove’s leak last week.

So why are they doing it? Ah well. After Jeremy Hunt the Culture Secretary failed to get the Lib Dems’ backing in the Commons, the fight back had to begin. And what better way to do it than to feed a line to the best resourced and most feared papers in the UK? So, more out of desperation than anything else, Young Dave and his fellow jolly good chaps have cultivated the Dacre press for their own ends.

But, as Tone and Pa Broon found out with their courtship of Rupe and his troops, the beast that is the Fourth Estate can just as easily turn on you: Paul Dacre is not known as the Robert Mugabe of Fleet Street for nothing. Today, Cameron is fawningly described as “super-fit, sleek and impeccably groomed, oozing confidence and enjoyment in his role”. But woe betide him if he fails to follow through.

After the Lord Mayor’s parade, the man sweeping the streets could soon be him.
Posted by Tim Fenton at 11:13