The Daily Maddie Is Back!

Today, for the tabloid part of the Fourth Estate, is a slow news day. We know this because four papers have revisited the case of Madeleine McCann for the umpteenth time: the possibility that parents Kate and Gerry were asked about yet more wall-to-wall coverage beforehand is not unadjacent to zero. So what has caused the Mail, Express, Mirror and Daily Star to act in concert? 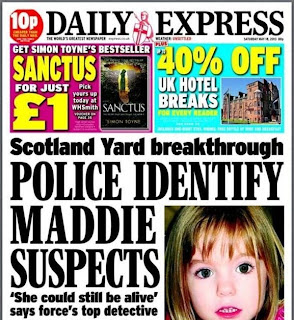 Simples. A review into the disappearance of the then three-year-old has been concluded by the Metropolitan Police, and has identified a number of “persons of interest” (or “suspects”, depending on which account you read). This number varies between “a handful” in the Express to “more than 20” in the Mail. Moreover, someone has once again said Madeleine could still be alive. 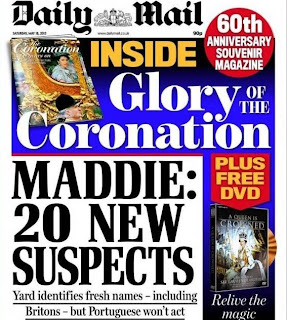 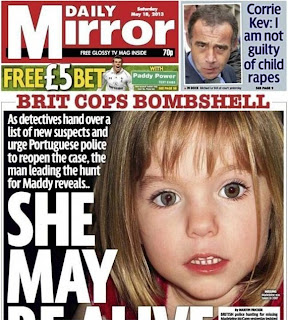 But there is also a further agenda to pursue, and that is kicking anyone who talks foreign (plus, of course, this is the EU we’re talking about, so it must by definition be A Very Bad Thing). The Mirror tells how “detectives ... urge Portuguese Police to reopen the case” and the Mail is at its most judgmental: “Yard identifies fresh names ... but Portuguese won’t act”. Curses! Foiled by those dastardly foreigners! 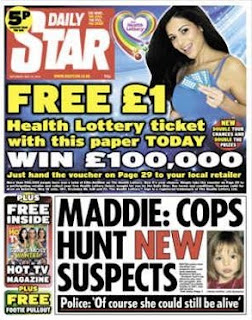 As with so many of the stories that papers like the Mail report in that selective style intended to lead readers to the desired conclusion, the small print gives the game away. When Paul Dacre’s finest tell “behind the scenes, a major diplomatic row is brewing because the Portuguese authorities are adamant they will not reopen the inquiry” they are not telling the whole story.

Because there is a very good reason for that action: “Officials in Lisbon have told their British counterparts that under Portuguese laws, they can reopen the case only if there is new evidence”. Moreover, as the Mirror has mentioned, a case review has been carried out by the authorities in Portugal. A team working in the city of Porto has not yet concluded its investigations.

But all of this gets lost in the frothing and ranting directed at those rotten foreigners, without whom the search would continue, Madeleine would be found, and all would be well. Every time hacks from British tabloids get on their case, it is not hard to understand that the Portuguese authorities get heartily sick of all their prodding. While they too want a happy ending, they do not possess a magic wand.

It’s so much easier when your only interest is selling a few more papers.

[UPDATE 20 May 1640 hours: And today we learn that the supposed bombshell is just an old one re-heated. Although the Express talks of a couple perhaps visiting the McCanns' apartment the night before the abduction, their account is notable only for its contradiction of the Mail's insistence that the Police forces in the UK and Portugal are not co-operating.

The more concrete and focused assertion comes from the Mail, and it is the old one about a group of cleaners in a white van. But this was aired in the Sun two months ago, and in the Mail later the same day. One might have expected someone at Northcliffe House to check first. And the white van story has its genesis in reports three years ago.

One fortunate aspect of all this for the McCanns is that it is the Metropolitan Police and the PJ who are dealing with the investigation - not the self-appointed Sherlocks of the press]
Posted by Tim Fenton at 10:59

Who are these "suspects"? Holiday-makers? Temporary workers? Many are probably not now in the jurisdiction of the Portuguese police.