I Still Don’t Agree With Nick

Following my previous observations on the writings of Nick Wood of Media Intelligence Partners (MIP), and the clear distress this caused to an anonymous commenter whose style was remarkably similar to the flannelled fool Henry Cole, tame gofer to the perpetually thirsty Paul Staines at the Guido Fawkes Blog, Wood has penned another rantfest of routine ignorance and cluelessness. 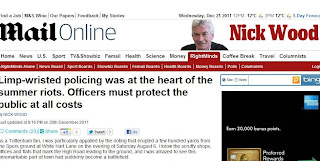 This time The Great Man – whose organisation, remember, manages all that bright young “talent” – has turned his attention to the summer’s riots. “Limp-wristed policing was at the heart of the summer riots” he thunders. It would not have taken more than a cursory word with any one of his younger staff to confirm that “limp-wristed” is slang for homosexual, or at least someone who is a wimp.

So before Wood even sets out his stall, he’s placed himself on the wrong side of the Met. Having observed this crass move, anyone thinking of doing business with MIP might wonder. But Nick is soon into his stride: “As a Tottenham fan, I was particularly appalled by the rioting”, he blusters. Not half as appalled as the folks who lived in the area and experienced the disturbances first hand, I suspect.

But he knows what needs to be done: “Sir Denis O’Connor, in his report into the riots, took a further step towards endorsing what we all knew ... that the Police should be authorised to deal far more robustly with outbreaks of this kind of mass criminality”. He then floats an equivalence between the woman who had to jump from her flat as Reeves’ store in Croydon was torched, and using live ammunition.

And he’s been reading too much Mad Mel: “The police no longer have that self belief. Now they shelter behind rule books, process, health and safety and risk assessments. In many case [sic] they are little more than uniformed bureaucrats”. So that’s another uninformed kick at the Met, then. Perhaps he ought to go and see just how these “uniformed bureaucrats” go about their business. But he won’t.

Why not? Because he’s spotted the culprits: “Media storms, like the one that erupted over the death of newspaper vendor Ian Tomlinson during the G20 riots, have sapped the willingness of the police to meet force with force, as they also singularly failed to do during the student anti-tuition fee demonstrations a year ago”. It’s the media’s fault, you see, and they didn’t use any force on those nasty students.

This style of why-oh-why ranting may find a ready audience at the Mail. But it merely underscores that, for someone whose organisation claims to bring “a wealth of experience”, Nick Wood displays a tin ear, a contempt for those who work to keep him and his business safe, and a general inability to inhabit the real world.

Perhaps that’s what spinning for a living does to you.

On the rare occasion I have anything to add to your dull and obsessive little tantrums, I do it under this Google account. So take your accusations and stick them up your arse.

Hen, it is you that is obsessively following me and throwing the tantrums.

You just can't stay away, can you? What would your pal Nad have said?