The Desmond press, never known to pass up an opportunity to creatively retell anything concerning the EU, has today brought forth another rantfest on the Daily Express front page: “Euro Court Drops Britain In It Again” froths Macer Hall before those Very Large Capital Letters proclaim “Asylum Seekers Can Stay”. But all is not – to no surprise – as the paper asserts. 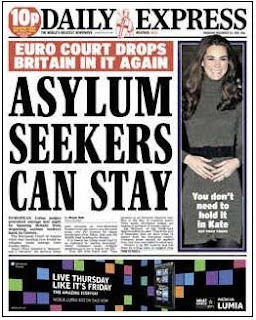 Part of the story is true: asylum applicants that have allegedly entered the EU via Greece are not being sent back there, even though the first EU member state entered should process the asylum application, under what are known as the Dublin II regulations. The Express does at least mention this, and that Greece is considered a “safe country” under the 1951 Convention on Refugees.

What the paper fails to mention is that the European Court of Justice (ECJ) ruling was requested by the Governments of the UK and Ireland as a way of clarifying the law, after some asylum seekers had challenged removal to Greece on human rights grounds. Put simply, most asylum seekers entering the EU do so via Greece, and the country is having difficulty coping with them.

This is in addition to poor conditions in the country’s holding centres, where asylum applicants routinely end up. And the problem is exacerbated by Greece’s economic problems, so both UK and Irish authorities had already stopped removals to Greece. But instead of reporting all of this, the Express has instead made space for a UKIP MEP to add a personal rant to that of its Political Editor.

Moreover, the story is not new news (as if anything on the Express front page ever is): the ruling was reported by the BBC yesterday. This report noted that Greece “has a huge backlog of cases”, and that the ECJ “was clarifying European law at the request of the Court of Appeal of England and Wales and the Irish High Court, which had raised concerns about the overloading of the Greek asylum system and its effects on asylum seekers”.

But instead of letting readers know of this, the Express has the inevitable quotes from someone at MigrationWatch, and self promoting Tory MP Priti Patel, the latter telling that upholding human rights, er, is “making a mockery of human rights”. Only towards the end do readers get a quote from immigration minister Damian Green: “we are working with Greece to improve their asylum processes”.

Removing all the grey areas in order to demonise both EU and asylum seekers in one go? That’ll be another Benchmark Of Excellence.