While the UK print and broadcast media continues to ponder our place in the world following Young Dave’s jolly good veto deployment exercise last week, nobody has been looking at the EU’s periphery – apart from at Greece, where the potential for further restructuring is coming ever closer. Because there appears to be at least one other country considering its position. 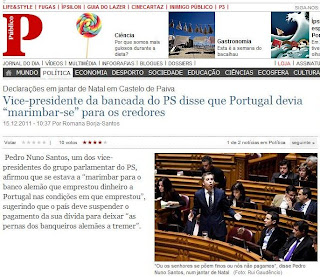 Last Saturday – the recording has only now come to light – Pedro Nuno Santos, vice President of Portugal’s opposition PS, was caught making a number of full and frank assertions about his country’s situation at a dinner party. Santos suggested that, in order to put his country first, the one weapon available was not to pay – or, as he put it, “make the German bankers’ legs tremble”.

It is an admission that the cycle of austerity, sacrifice and debt payment is not working, but after being contacted by the Público, he chose his words more carefully: “I never said that the debt should not be paid” he told them. But he also said that putting the Portuguese economy into recession stood in the way of meeting the terms of the “Troika” (IMF, EU and ECB) agreement previously signed.

That contrasts with his words at the dinner, where he said “We have a bomb that we can use in the face of [the] German and [the] French. This atomic bomb is simply do not pay”. He also told that the Portuguese came “first, before the French and German bankers”. Now, the PS is – since the Elections last June – in opposition, but this is, despite its title, a mainstream Social Democratic party.

So Santos’ comments cannot be ascribed to extremism, but more correctly to his making an honest admission during what he probably thought was a private gathering (some of his UK counterparts will understand the situation). I did say after last week’s summit that there would have to be further restructuring within the Eurozone, and this is an early sign of where it could happen.

It makes it yet more imperative that the Eurozone has a lender of last resort – because, otherwise, just the suggestion that Portugal might stop (however briefly) its repayments could set the bears running. If the Germans want to keep the single currency intact, then they have to act, and act quickly.