Many in the hotel and catering industry – and any other industry that depends to a greater or lesser extent on tourism – would dearly love more of us Brits to take our holidays in the UK. And those on the Railway would no doubt fancy a slice of the action as well. Unfortunately for the latter category, their act needs some work before it will be even a little appealing to the discerning punter, as I discovered yesterday in North Wales. 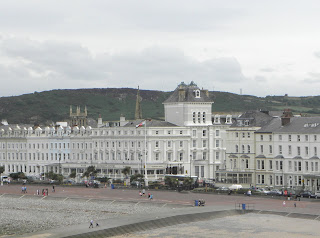 An eminently strollable prom prom prom
Consider the town of Llandudno, a straightforward journey from Merseyside, Manchester or the West Midlands. Lots of holiday accommodation, attractions on the doorstep (including Conwy Castle just up the road), and a nicely preserved promenade all help to bring in the visitors. Pity about the railway station.

It was former BR head man Peter Parker who coined the term “crumbling edge of quality”. Had he been alive today, he would have had no trouble in pointing to Llandudno’s bare and unappealing terminus as a prime example of what he meant. 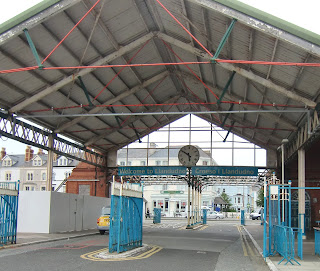 Not much of a roof
This is the sight greeting those arriving by rail. Note that the wall holding up the roof at left appears to have been partially demolished. And that roof is all you get: there is no shelter at all on the platforms. But at least the clock works.

There is some seating out of shot to the right, but the waiting room is closed after early afternoon – yes, that’s when the day trippers arrive back at the station for their trains home – and the only human presence is a taxi office. 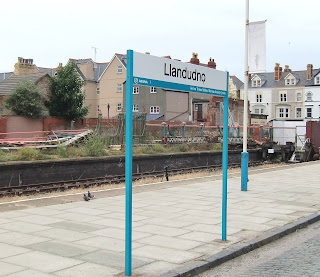 Not much of a welcome
Adding to the impression of decay is the west side of the station, where there are two now abandoned platforms, together with an assortment of apparently randomly discarded junk.

Fortunately, there is a pub opposite the station, so at least passengers can have a drink and keep dry when, as happened yesterday, the clouds came and brought a few spots of rain.

I’m aware that the industry is going to be squeezed by spending cuts in the next few years, but this station is a disgrace, especially in such a well kept town.
Posted by Tim Fenton at 17:26