Not his preferred kind of bird 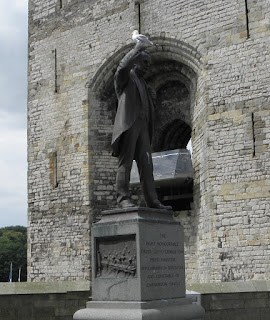 In a corner of the square in central Caernarfon, overlooked by the castle, is a statue of the area’s most famous parliamentarian, David Lloyd George, who represented the city at Westminster for 55 years. LG was the only Welshman to become Prime Minister, and had English as a second language. He was reckoned to be a more charismatic orator in his native Welsh.
Forward to 2010, and Welsh is still the first language of the area. Around the square, perhaps more folks can be heard speaking English, but this is also tourist country. A few hundred metres away, where shoppers queue for their buses back to outlying towns and villages, most speak Welsh.
When some tourists fetched up at a pub in this part of Wales, and found the locals speaking Welsh, the story started that this was merely out of dislike and to stop the tourists understanding what was being said. This story is complete baloney: the locals speak Welsh because, well, that is what they speak.
However, my experience these last few days, when out and about in the area, is that those same locals assume that strangers will have English rather than Welsh. And they are most welcoming people.
Cymru am bach!
Posted by Tim Fenton at 19:11

And, speaking of baloney, there's also the one about how, because somebody recognises an English word as they come within earshot, "as soon as I came in they switched to Welsh."