This week, permission has been given for just over 1100 – yes, eleven hundred – new homes to be built in the Crewe area. This includes the 650 that I mentioned back in April, the entrance to which means demolishing the Cross Keys, a roadhouse pub at the end of Remer Street. But the real argument is not over the 1100, but the possibility of twelve pitches for Travellers. 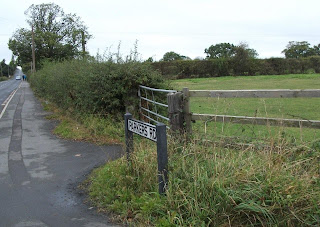 To the right of this view is a field which, it seems, is owned by Cheshire East Council. It’s on the north side of Parkers Lane in Coppenhall, and close to where another 400 houses are to be built. Cheshire East has proposed that the field become an official site for Travellers, with an amenity block and mains power and drainage. And so all hell has broken loose. 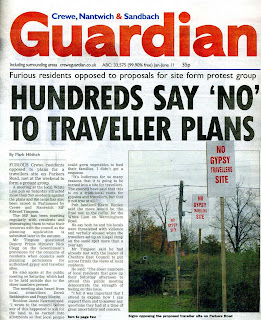 The area does have some housing – on the road behind the camera – but is not a built up area. Nevertheless, 250 people turned up last Saturday to a meeting nearby, and were overwhelmingly hostile to the proposal. Stories of threatening and abusive behaviour relating to a previous (illegal) occupation of the site have been circulating. And local MP Edward Timpson has been in attendance.

Just how much damage twelve families can do merely by moving – probably temporarily – onto a council run site is unclear. That there has been an illegal Travellers’ occupation and that it has not been welcome certainly is. I have no strong opinion on the affair, except to hope that all concerned reach their decisions through rational, calm and factual debate.

One observation I would make is this: Crewe has welcomed people of many nationalities, ethnicities and religions in recent years, yet has none of the overt problems with groups such as the EDL which has occurred in nearby Stoke-on-Trent. Huge numbers of new houses are slated to be built: although some are opposed, there is general acceptance that this is good for the town.

But as soon as someone mentions Travellers, it is as if an open wound had been scratched. That is not something I’ve yet got my head around.

What I cant get my head around is why they call themselves 'Travellers' when they clearly set up base which seems to involve no travelling?

i pity any traveller who has to resort to living in Crewe. what a hole.