Miliband Must Face Down Murdoch

Newspapers dabbling in politics is not a new thing: three days before the General Election of 1931, Stanley Baldwin tired of attacks by those owned by Max Beaverbrook and the Rothermeres, observing “The newspapers attacking me are not newspapers in the ordinary sense … They are engines of propaganda for the constantly changing policies, desires, personal vices, personal likes and dislikes of the two men”. 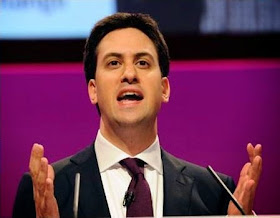 Yes, it's that big an issue. No pressure, then, Ed

He went on “What are their methods? Their methods are direct falsehoods, misrepresentation, half-truths, the alteration of the speaker's meaning by publishing a sentence apart from the context...What the proprietorship of these papers is aiming at is power, and power without responsibility – the prerogative of the harlot throughout the ages”. Now there are five men. But the methods are, sadly, unchanged.

This was addressed yesterday in a Guardian Comment Is Free piece by Nick Davies, whose dogged determination brought the phone hacking scandal into the mainstream, who told “At this election, British politicians can afford to speak out against Rupert Murdoch”. But it isn’t just Murdoch, and there is only one politician who is likely to speak out. The only man who can is Mil The Younger. And this is why he must.

The proprietors - Murdoch, Rothermere (delegating his power largely to the legendarily foul mouthed Paul Dacre), the Barclay Brothers, and Richard “Dirty” Desmond, are to a man obscenely rich. Dirty Des, to his credit, resides in the UK: the others, at least for tax purposes, do not. They claim to care about ordinary Britons. The stark reality is that they do not: what they care about is Themselves Personally Now.

These less than august beings are not interested in the effect of austerity, the EU, immigration, taxation, the NHS, transport and travel, the environment, or anything else on ordinary folk. But they are interested, just as Beaverbrook, and Rothermere’s predecessor were, in the exercise of power, and without having to run for elective office. Thus they exert other methods in pursuit of bending others to their will.

The sycophants and crawlers are rewarded with jobs; those too inclined to independent thought are shunned. Any dissenters not armed with their own legal teams are there merely to be shat on from the greatest possible height. Those caught in the crossfire - the Dowlers, the McCanns, Christopher Jeffries, Ann Diamond, Andy Miller, and many more - are treated as so much collateral damage.

The essence of leadership, as J K Galbraith observed, “was the willingness to confront unequivocally the major anxiety of the people in their time”. Right now, more and more people are anxious that their Government should be run by those they elect, to do what they have been elected to do, and not constantly swayed by the dictates of unelected billionaires whose main priorities are self-interest and flogging a few more papers.

Of the two potential Prime Ministerial choices, only Ed Miliband is capable of making that commitment. Cameron has already sold his soul in order to make his own Faustian pact. The decision to commit thus is in the Labour leader’s hands. Many who want their politicians to show leadership will hope that he chooses wisely.
Tim Fenton at 12:47