With the upcoming General Election likely to see a far greater usage of social media than in the past, parties can use their presence to spin all they like, but crossing the line into forthright dishonesty can only strip away any veneer of credibility. Sadly for the folks at CCHQ, they have been found wanting in this department not once, but twice, having not learned the lesson the first time round. 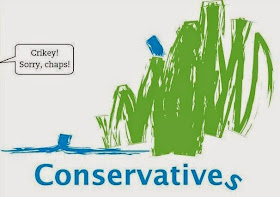 It all started to unravel yesterday afternoon, as Jack of Kent observed “So [Conservatives’] proposals for abolishing fundamental rights were for press eyes only, not for general publication. Tells you everything”. CCHQ weren’t having that, not from some rotten lefty legal bod who writes for the FT. 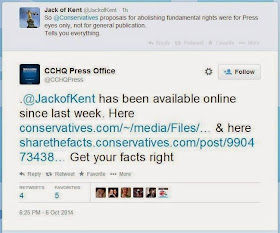 “[It] has been available online since last week. Here [link] and here [link]. Get your facts right” they shot back. Jack of Kent was on it in very short order: “How long has that ‘Read our proposals in full here (PDF document)’ been on your site?”. CCHQ had been caught doing a quick fix and then pretending it had been there all the time. 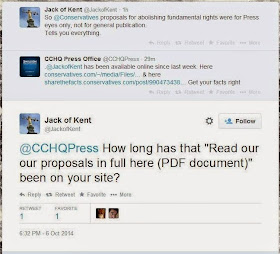 Things then got worse as Jack of Kent followed up with “This is where [CCHQ Press] falsely made out there was a link to the pdf all along [link]. In fact, it has just been added”. Graham Charlton confirmed: “Page cache from yesterday shows no link at all”. The Tory spinners had been caught lying. 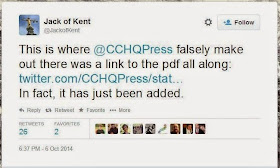 So it might be thought that, come the new day, there would be a special effort not to be caught telling whoppers, if only because of the reputational damage this might cause. But that thought would have been badly misplaced as whoever was operating the CCHQ Press Twitter feed opened up with a monumental gaffe – and then tried to wriggle out of coming clean about it. 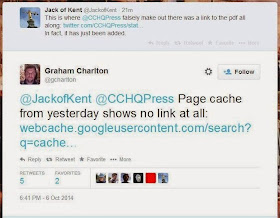 “Will [Ed Miliband] have the guts to condemn this damaging Tube strike called by one of his paymasters?” it demanded. Wait, what? The LBC piece linked says it’s an RMT action ... don’t the CCHQ people remember them dis-affiliating from the Labour Party? Well, someone remembered. 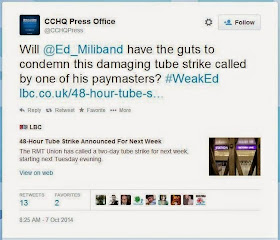 As CCHQ Press additionally cited Grant “Spiv” Shapps saying “[Ed Miliband] remains too weak to speak out against his union moneymen”, the Labour press team put them all out of their misery: “The RMT is not affiliated to the Labour Party”. They forgot one of Bob Crow’s lasting legacies. 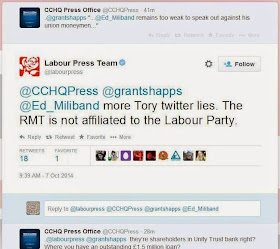 But CCHQ Press could not climb down: instead, there was one last, lame, barrel-scraping excuse. “They’re shareholders in the Unity trust bank right? Where you have an outstanding £1.5 million loan?” Yeah, right: they aren’t Miliband’s paymasters, but they have some shares in a bank.

CCHQ are cutting down on lighting, working by the light of their burning trousers.

[UPDATE 9 October 1135 hours: in order to illustrate just how CCHQ was caught out not publicising the party's proposals on a "British Bill Of Rights", made it available, and then lied about when they had done it, Jack Of Kent has produced a timeline which you can see HERE.

As he observed, "Why lie over something so trivial, and expect to get away with it?" That isn't one that I can answer, so over to Tory HQ. No pressure, party people]
Tim Fenton at 17:26