The subject of murder among farmers in South Africa, which Zelo Street covered recently after the visit to that country by pro-am motormouth Katie Hopkins, has come back to the fore after Lauren Southern, who is persona non grata in the UK, released a documentary on the subject. Farmlands claims to tell the story of the plight of white farmers in South Africa, and asserts that they are being murdered in disproportionate numbers.

Sadly for all those out on the far right, Ms Southern’s painstaking research has gone no further than to produce the kind of propaganda designed to fire up her supporter base - white racists. Here, she is lauded for being prepared to “say the unsayable”. Elsewhere, her documentary has been dismissed as hype, fearmongering, egocentric self-promotion, and even AWB supremacist propaganda.

Why this should be is not hard to discover. As I pointed out when considering Ms Hopkins’ claims, a paper published by the Medical Research Council had said of South Africa’s murder rate “it is lower than the murder rate documented in 1970 under apartheid” and then added “the increase in the white homicide rate began in the late 1970s and has remained markedly less than the increase in murder rates for all other race groups”.

It should have come as no surprise, then, to see the Guardian report the other day “Murders of farmers in South Africa at 20-year low, research shows … Forty-seven farmers reportedly killed in 2017-18, consistent with decline since peak in 1998 when 153 died”.

There was more. “Forty-seven farmers were killed in 2017-18, according to statistics compiled by AgriSA, an association of hundreds of agricultural associations across South Africa. This is consistent with a steady decline since a peak of violence in 1998 when 153 died … Between 80 and 100 were murdered each year from 2003 to 2011, and around 60 until 2016”. The murder rate among white farmers is actually declining. 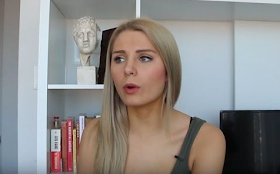 Lauren Southern - banned from the UK

And more. “The figures have been challenged by other organisations representing farmers in South Africa, but AgriSA said its research was ‘reliable’ and an important contribution to understanding the threat faced by farmers in South Africa … The chair of the association’s Center of Excellence on Rural Safety, Kobus Breytenbach, said there had been a rise in the number of attacks on farms to 561, from 478 in 2016-17 … But the numbers remain much lower than the 1,068 reached in 2001-02”.

Breytenbach also pointed out that one factor in the decline was that farmers are taking more effective security precautions “to protect themselves and their livelihoods … The rural community has become alert and prepared … They are working with the South African police service and are much more organised than 20 years ago. Everyone is aware of the situation”. It’s a complex picture, but figures do not stand up Ms Southern’s claims.

But then, one look at that publicity image for Farmlands should tell you all you need to know about Lauren Southern and her painstaking research. Look at that vehicle on the highway, driving away from the camera. See the howler yet?

It’s driving on the right. In South Africa, they drive on the left. Lauren Southern can’t even get her publicity stills right. One more for the bin.