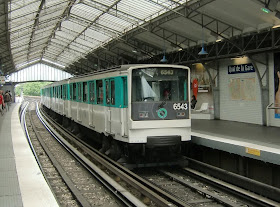 
So the comparison with Paris is largely meaningless. No change there, then.
Tim Fenton at 10:39