After I called out the loathsome Toby Young over his attempt to equate the proportion of privately educated Olympic medallists with the idea that there was a movement in state schools to stop or at least suppress competitive sport, the response was significant, and I have to say any adverse comment was passed against Tobes, and not me. There was also further information. 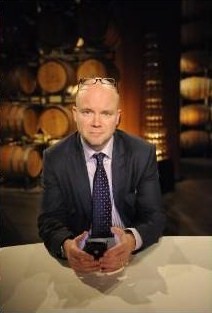 And that information is significant: thanks to Daniel Elton, I’ve had a chance to scan the numbers for competitive sports offered in schools, and the data more or less concurs with the proposition that it is the sports offered in very few schools where privately educated athletes have figured the strongest. So, as I asserted previously, it’s to do with access to facilities first.

Whereas over 97% of schools do football (the round ball version), over 90% offer athletics and gymnastics, and over 80% offer swimming, the figures for cycling have recently veered between 21% and 55%, with other water sports, such as sailing, canoeing, and rowing, right down the list. And very few schools offer equestrianism. So where have the privately educated scored their medals? 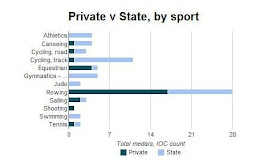 To no surprise at all – and thanks are due to the deeply subversive Guardian for providing the graphics – the most medals garnered by privately educated athletes are for equestrianism, rowing, and sailing. Other medals were won in shooting, cycling, canoeing and tennis. But all athletics, gymnastics, judo and swimming medals were won by state educated entrants.

Moreover, most of those privately educated British Olympic medals have been won in rowing and equestrianism, where the participants have been part of a team – like a four or eight at rowing. So four privately educated rowers getting gold may be one victory, but the number of medals is four times that of one of those state educated athletes winning in the Olympic Stadium last Saturday.

It was Toby Young who pointed out that the Olympic rowing event is taking place at Eton Dorney, which is effectively Eton School’s own facility. And it’s glaringly obvious from running the numbers that having the money – which is more likely to be the case for the privately educated – is what generates the reward for those entrants. But the medal haul from state educated athletes proves that competition is there.

And the conclusion has to be that Tobes is still dead wrong: the idea that state schools are curbing competition is ludicrous, and in no way proven by the medal table. Just think how much better state schools would be at providing future Olympic hopefuls if they all had access to the same facilities as Eton, too. Then we really would be showing the rest of the world a clean pair of heels.

But that would involve cooperation, not confrontation. How about it, Toby?
Tim Fenton at 18:24